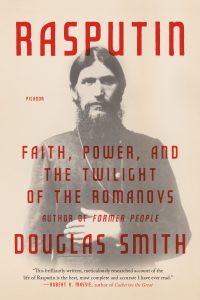 Rasputin: Faith, Power, and the Twilight of the Romanovs

I have always been entranced by the fate of Nicholas and Alexandra and their children, as they were certainly a loving set of parents and husband and wife.  As one of the most tragic pairs in the history of Russia, the entrance of Rasputin, the strange and occultist monk who became their advisor demands an audience.  And Douglas Smith has offered us this well researched and authentic definitive biography of “the most mysterious and controversial figure…that place Rasputin’s life in a new, more realistic context.”

Although this book is a biography, it reads like one of the best fiction pieces on the market today.  “From the opening pages of his colossal biography of Grigory Rasputin, the historian Douglas Smith dismantles many of the myths enshrouding the monk who exerted extraordinary power over Nicolas II and Alexandra, emperor and empress of Russia during the twilight of the Romanov dynasty a century ago.”

Even now, one hundred years later, Rasputin has the image of evil, especially with his relationship with the torn parents of the sickly heir to the throne, Alexa. Born a hemophiliac, the child and only heir to the Russian Romanov throne was the only son of Nicolas and Alexandra and the entire family loved him dearly.  As distraught parents, they sought out any way to keep him out of pain and alive as he suffered deeply anytime he fell or bruised.

This tragic family is well defined, and the history of Russia and Rasputin are both page turning and majestic as well as one of the most horrific times in Russian history.  A beautifully rendered picture of a family torn and a country in transition, Rasputin puts myths to rest with the reality of two parents and a child.

« What to Do for Holiday Gifts?  Surprise wih a Monthly Candle – or Two!
Here Comes Santa Claus »