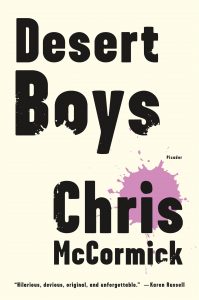 Desert Boys had me from the get-go.  No rumination needed here.

A stunning debut novel incorporating urban and suburban, youth and manhood, this bildungsroman transforms into a panorama of themes:   small towns that erupt with massive growing pains into cities that bury their own; children who demand teenage angst thrown against manhood in ways that bloom and sometimes doom; and a new author who simply dazzles with insight and just plain talent.  Desert Boys is the best I have read about man-boys since Making Nice by Matt Sumell.

With delicious prose Chris McCormick layers, a novel with vignettes and short stories following Daley “Kush” Kushner, a boy who inhabits the Mojave Desert area in California with his friends Dan Wells and Richard Karinger.  Kush lives with his Armenian mother, his saucy sister, a placid dad and with his gayness, which he doesn’t really know how to handle but that brands him as an outlier, along with his buddies Dan and Richard.  He leaves home to live in San Francisco with Lloyd, but somehow, he returns to his hometown, now a big city that he almost doesn’t recognize.

The characters in Desert Boys swoon with authenticity and blossom with transformation and powerful themes as the desert eats its own and throws them back out into a fragmented and dangerous world.  And in an irony, that compels Kush to return to the place he most hates – home – his first love and best friend Richard Karinger dies in another desert far from home in a war Kush cannot understand much less participate in.

Absolutely stunning, this is a debut novel that should not be reviewed but simply read.  I could not put it down, and will read it again.  Between the announcement that happens when boys transform into men and towns struggle and ramp into cities, the tension driving Desert Boys is incredibly painful and beautiful in a novel written with compassion and wisdom.  Great job McCormick.