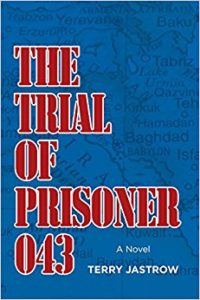 The Trial of Prisoner 043

Terry Jastrow’s debut novel – simultaneously fictional and historically compelling – pulsates with a throbbing plot and quintessential questions of the criminality of the Iraq War – and the guilt or innocence of ex-president George W. Bush regarding crimes for starting a war with Sadam Hussein, who had tried to assassinate George H. W. Bush, his father.

With precision and passion, rare intelligence and a journalistic integrity, The Trial of Prisoner 043 delivers Bush to The Hague’s ICC (International Criminal Court) to be tried for war crimes in the 2003 eight yearlong Iraq War after 9/11 occurred.  Instead of seeking bin Laden and Al Qaeda, Bush strategized the war with Iraq, although no biological weapons had been found and while Saddam Hussein could not possibly carry on a war with anyone. Bush’s war cry was to democratize Iraq after killing Hussein, although Iraq did not desire to be democratized.

As Jastrow delineates every aspect of Bush’s war fever on Iraq, he delivers a powerful novel with the question of accountability of the leaders of superpowers and their inclination to begin wars on no reasonable grounds of “security for the American people.”  What constitutes an unnecessary war and its impact on the country besieged (in this case Iraq).

Bush’s accountability for the 4 trillion dollar war, the lives lost on both sides, the instability of the war left in its wake, the war atrocities, and allowing terrorists to destroy Iraq in the war’s wake – what is left of it – creates the enigma that the war was totally unnecessary and allowed al Qaeda to linger in the Afghanistan and Iran while we waged an 8 year war for no reason.

Spellbinding and written with great intelligence and facts, Jastrow’s ending is almost – but not quite – unbelievable.  Shocking, and erupting into a courtroom drama that tells the entire story in fascinating detail, from George W. Bush’s abduction as he plays golf on St. Andrew’s Golf Course in Scotland to his defense team fighting a prosecution both lethal and strong, to the ending wherein the United States appears as a weak moral defender, The Trial of Prisoner 043 leads us into moral ground we would rather not apply to the United States.

Thought provoking questions about morality and war, power and integrity as well as intent lead the reader into another world where The Ugly American canonizes its presidency.

Fast and furious, The Trial of Prisoner 043 resonates as we realize that we do not have the freedom to attack other countries because we disagree with their form of government or we need their resources for our own benefit – or do we?

« It’s Not Yet Dark – a review
Are beets the answer to my soda addiction? »