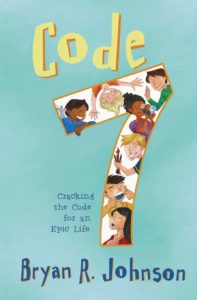 Cracking the Code for an epic Life

This children’s book is animated and productive, as seven elementary school friends decide to empower themselves with a code word to help themselves be real and to help their community.

Flint Hill elementary is celebrating its fiftieth anniversary and Principal Cooler asks her 5th grade students how they would like to celebrate.  Everyone shouts out that Jefferson is a great drawer and suddenly Jefferson has agreed to paint a mural on the wall that overlooks the lawn and faces the town.  Jefferson can paint and draw and now he finds himself thinking – what can I put on the mural?  Everyone lends their ideas, and finally Jefferson decides to do what he finds inside himself instead of listening to all the great ideas around him – like a real artist.  Jefferson paints a continuation of the beautiful lawn that Mr. Summers keeps cut and mowed all year long, with a horizon and sky in the distance with no lines in between.  And Jefferson realized that even he, a kid, had vision – his own vision – and that it pleased other people too.

Sebastian wants a specific game – all of his friends have it.  But his parents want Sebastian to spend his time in a more productive way.  So Sebastian asks his Aunt Martha what to do, and Aunt Martha suggests that Sebastian earn his G-Force 5000 game by doing useful things.  Aunt Martha gives him some of her “famous” candy taffy – a secret recipe that has been in the family for years – and suddenly Sebastian decides to sell the candy to make money for his game.  He sneaks into Aunt Martha’s purse and steals the recipe for the taffy candy.  Sebastian talks his brother Jason into helping him for 10 cents for every dollar Sebastian made and they made bags and bags of bulk taffy.  Then his customers break out in hives! 27 students went to the nurse’s office with hives and Nurse Cratchet found the source: the taffy!

Sebastian was in a lot of trouble.  Aunt Martha was aghast.  Sebastian ran out of vanilla so they used almond extract instead – and many people are allergic to nuts.

Sebastian returned all the money and after the Smash Mouth taffy episode, Sebastian decided to help and do a world of good – he started washing up the dirty dishes.

With five other “lesson” stories from five other elementary school students, Code Seven illustrates how children can learn and be productive.  Each story contains a “code” to be a better student and person and the stories are readable and enlightening.