You are here: Home / They Read / The Fall of Heaven – a review 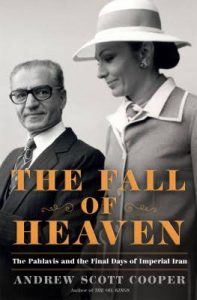 The Fall of Heaven

Passionate, intimate, reflective, historically accurate, The Fall of Heaven by Andrew Scott Cooper presents the rise and fall of the Pahlavi Dynasty (1919-1980) -, and the last shah of Iran, Mohammad Reza Shah Pahlavi and his wife, Empress Farah.  Like many readers, I have kept myself uninformed about the recent history of Iran and how the Ayatollah Khomeini gained the country as his own after the Shah and Farah Pahlavi and this book is exemplary in presenting the Shah as a stern and fierce present socially while a paternal and often confused man personally.  As Cooper presents him, the Shah hated violence and wanted his people to have peace, while he himself and his family lived in luxury.  What Cooper points out is the Shah, like Ataturk previously in Turkey, craved to modernize his country and to support women’s’ rights, education, and Western dress and thought.  His wife, Empress Farah was a true partner and was important in her own right, as the Shah expected her to be.

When the Shah came to the throne he was young, and inherited a mostly illiterate and poverty stricken country.  His father, the general Reza Shah, abdicated his throne to his son in 1941 and left the young shah struggling with control over the colonial powers and their desire for Iran’s oil and constantly stood between keeping foreigners Iran’s ally while juggling modernizing Iran and the umahs that religiously ran the country.  In 1973, the Shah pulled off the “oil shock” that pulled millions fast and furiously into the country allowing the Shah and his Empress to put his and her projects into place:  the Shah wanted Iranian students studying engineering and technology in the US and England, he pursued education and literacy for his people, he and Farah fought for health care, art, culture, women’s rights, and the pursuit of non-violent means to stay in power.  The Shah was a loving father and devoted husband to his third wife and his five children.

Although Cooper gives us the nice guy version of Shah Mohammed Reza, I believed every word in this superbly written account of one fallible but caring leader and his poor and struggling country.  Beautifully done I could read it a second time!

« Upcoming Netflix Shows To Get Excited About (And Those You May Have Missed)
The Review Broads Live for TOILET PAPER – BRAND NEW CHARMIN® ESSENTIALS SOFT! »