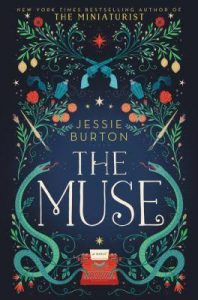 I loved The Miniaturist, Burton’s break out novel, and when I was offered a review copy of her new book, The Muse I couldn’t wait to get my eyes on it.  And Jessie Burton does not disappoint.

With her crisp, intelligent prose, Jessie Burton’s protagonists, Odelle Bastien  and Margaret Quick in 1967 London, and Olive Schloss and Teresa in 1936 Spain create a spell and a miasma that circles around an unknown painter, Isaac Robles.  As she swings from 1936 to 1967, Burton creates an atmosphere reminiscent of Daphne du Maurier’s Rebecca, wherein characters are not whom they seem.

When Odelle Bastien, a writer emigrated from the Caribbean to 1967 London, finds a job at the Skelton Art Gallery as a typist she is thrilled.  Her childhood friend and roommate, Cynthia, encourages Odelle both as a writer and a friend.  She has been engaged by Margaret Quick simply upon her letter of request.  When Odelle arrives at the Gallery for her first day of work, she meets Margaret, a glamorous and yet reticent boss who becomes her friend.

Harold Schloss, a Viennese art dealer, and his wife, an English heiress, have a villa in Arazuelo, Spain, a small poverty laden town on the southern coast.  Their daughter Olive finds a friend in Teresa, a young girl hired as their housekeeper, and her beautiful but strange brother Isaac Robles.  Isaac fancies himself a painter who will gain the same fame as Picasso, but he is actually a dilettante, and he is involved with the Spanish evolution that frames the town and everyone in it and that will erupt soon.

Olive is a gifted artist, and when she and Teresa and Isaac involve themselves in a plot to sell Olive’s paintings under Isaac’s name, the consequences swirl and contain the novel in a labyrinthine swell of both characters and time. What started in 1936 explodes in 1967 as told by Odelle as she becomes Margaret’s confidante.

Imposing and intricate, Odelle and Margaret fuse two eras that rise and fall upon one painting discovered at the Skelton Gallery with the initials I.R.  The writing enchants, the plot intrigues, and once more, Burton has penned a novel that fascinates and unravels until the very last page.