You are here: Home / Fun / Books / Book review: Being a Beast 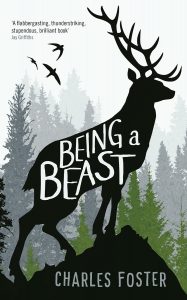 Alluring.  Ethereal.  Other worldly.  Mythic, mandatory, factual, philosophical.  Oh, and Charles Foster should be married to a dictionary!!

Such great writing! And such solid inquiry into cross species “beingness” (sentience).  Being a Beast is one of those special once in a great moon books that held me in thrall.  As I escaped past the last page, I felt so utterly sad that I jumped back into the first page again.  As Foster lives, literally and figuratively, in close proximity to five species of animals in their habitat, he inhales their essence by becoming as close to one of them that he can.  He ponders their senses, and the difference in human senses and animal senses.  He eats what they eat and he crawls, hunts, observes and ponders their perspectives from their environment: the earth.  Their predators, their survival techniques, their unique adaptations to survive.

He seeks identity, both in animals, and humans.  In prose that shimmers in its brilliance, he asks who am I?  Who are they? Can we embrace the other species that hover around us with the same senses adapted to different uses and different tempos and different attenuations?  What is our relationship to the primordial equations?

I have not enjoyed a book this much in many years.  Charles Foster decides to become more human by crossing the divide of five different species of animals: badger, otter, fox, deer and swift.  He slept in a burrow in a Welsh hillside, and ate earthworms.  He lived in the water and tried catching fish like the otters around him.  He ate spoiled garbage can food as he followed foxes in London.  He was hunted by hounds as a fox.  He went on the migration path of swifts over the Straits of Gibraltar to connect.  He tried to use the senses that they used instead of what humans use.

As Foster philosophizes, writes a memoir, studies and memorializes these animals, celebrates nature and its joys and sorrows, throws science at us simply and easily and digs into the depths of his own soul, he creates an adventure both wise and full of joy as we become more human in our realization that we are not alone on this earth and that we have much to learn.

Excellent and instinctual, one of the best reads of the year.

« Book review: Under the Stars
The Tempest or the Teapot? »