You are here: Home / They Read / Book review: The Nest 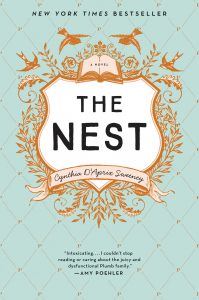 With a tangle of Ann Tyler, a tingle of Jodi Picoult and a ping of Alice Munroe, The Nest reveals itself to be one of this year’s best. And then just when you think you have Ms. Sweeney pinned, she coalesces into a writer’s writer, with clarity, humor, wisdom, betrayal and sibling rivalry enough to make Othello rethink his plot! Awesome read about the entanglement, bravery and sinister roles that adult siblings grow into and out of.

The Plumbs are a family that revolves around brother Leo, the charismatic black sheep brother and his mother’s favorite child. Leo makes an early fortune, loses it by partying and drinking and womanizing, ignoring his wife and family, until he hits a wall and creates a legal nightmare both financially and ethically. He is driving drunk, entices a young 19 year old waitress to take a ride with him so he can seduce her, has an accident and the young woman loses her foot. Leo is bailed out by his cold bitch of a mother. And in order to pay off the young woman’s family, his mother uses the “children’s” inheritance to do so.

It seems Mr. Plumb, the long dead patriarch, has invested a small sum of money for his adult children to have a nice vacation, or to spend on something small. His intent is not to leave a fortune as he feels that his children as adults are on their own. His surviving wife, however, is in charge of the investment funds and can use them “in an emergency only.”

As things happen, the investments thrive in the stock market and are worth about 2 ½ million when the youngest child, Melody, turns forty. Just before that event, Mrs. Plumb pulls out the 2 million and uses it to save Leo’s proverbial ass.

As Melody, Beatrice and Jack go to New York to confront Leo and get their payback “Nest” funds, Leo reacts. He is just out of rehab and still startled that he has gotten off the hook by dear old mom. As it happens, Melody, Beatrice and Jack have desperate needs of the money for their own problems, and they want a promise from Leo that he will get the money back to them.

Will brother Leo exchange roles and rescue his brother and two sisters? Or will the family self-destruct without Daddy’s investment funds. Or – can we imagine that everyone will figure out their own issues that they have created, without the money they have been waiting for most of their lives?

Stunningly brilliant, always poignant, and full of the nuance and truth of families and sibling roles in every family, the Nest ponders what the reality of family is, who controls whom, where the power lies, and how it plays out in a dysfunctional but real family. As each of the siblings makes their own discoveries about life, love, betrayal and reality, Ms. Sweeney provides a startling frame around the picture of characters so authentic they shout out to us.

Beautifully done, wonderfully written, tauntingly true, this is not a novel to miss. Perfection!