You are here: Home / They Read / Book review: Inspector of the Dead 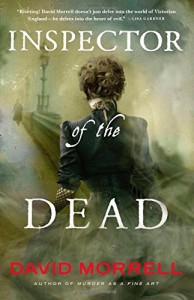 Inspector of the Dead

The Crimean War gulps English men as they fall in battle.  The Empire that Queen Victoria has built falls.  And a killer is stalking the Queen.

After Murder as a Fine Art, I didn’t believe Morrell could do better.  He has.  Inspector of the Dead follows the Opium Eater Thomas De Quincey and his daughter Emily, as well as their partners in crime, Detectives Ryan and Becker of Scotland Yard, into the privacy of London Church pews, personal libraries, and the homes of the rich.  De Quincey, the famous author of the Confessions of an Opium Eater, is hated in London, and loved by his daughter.  Emily knows that De Quincey is the only one who can find the murderer and save the Queen.  As De Quincey follows his head, Emily follows her heart, for the De Quincey’s love their Queen and their England.  Morrell takes one of the most controversial and notoriously famous men of 1855 and Sherlock Holmes him into life.

Morrell’s plots, complicated and intelligent, match his ability to set us into the middle of London and surround us in the mist and murders that live there.  Based on the true life off Thomas De Quincey, the opium addict, the historical facts are pristine; however, it is Morrell’s talent as one of the best crime writers around that tantalizes us into doing an all-nighter!  I couldn’t go to sleep until I finished Inspector of the Dead.

Like Anne Perry, Morrell’s London proves risky and full of despair.  Based on a true account of the assassination attempt on Queen Victoria in a London crumpling from the fall of the government, Morrell welds the reader into his killer’s mind, as he offers Thomas and Emily’s logic and intelligent chase from clue to clue.

Inspector of the Dead

is available for purchase on Amazon.com and at bookstores nationwide