You are here: Home / They Watch / Review: The Texas Chainsaw Massacre 40th Anniv 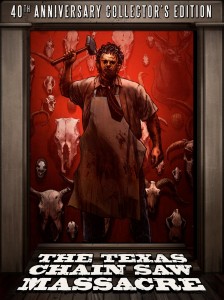 It’s no secret that I love the first two Texas Chainsaw movies. I’ve seen them both countless times but I am always brought back to the first time that I saw the original TCM. I remember it was the first week of my freshman year of college and until then I’d only seen one movie that truly scared me as a teen or an adult, The Shining. The Texas Chainsaw Massacre was the first and maybe only film to truly give me that sense of dread again, this time as an adult.

What makes this film both frightening and a truly unique film experience?

I still couldn’t tell you other than one word “Atmosphere.” Looking back,  I remember sitting in my dorm room alone. watching this for the first time and jumping out of my seat when that metal door slams open.

This film is my absolutely favorite slasher film of all time and one of my favorite horror films of all time.

In case you haven’t seen it here’s a bit about the story:

En route to visit their grandfather’s grave (which has apparently been ritualistically desecrated), five teenagers drive past a slaughterhouse, pick up (and quickly drop off) a sinister hitch-hiker, eat some delicious home-cured meat at a roadside gas station, before ending up at the old family home – where they’re plunged into a never-ending nightmare, as they meet a family of cannibals who more than make up for in power tools what they lack in social skills…
TCM was made in summer of 1973, in the aftermath of the Vietnam War and the Munich Olympics, and at the height of the Watergate. It was an era of airplane hijackings, government oppression and dishonesty, racial conflict, terrorism and revolution. It was a dark time in history. The Texas Chainsaw Massacre is one of the best reflections of the time, as a group of young individuals, returning to the nostalgic home of their childhood, stumble into the raw and irrational cruelty.

Horror films are never about what you think that they are about.

This Blu-Ray release is an amazing upscale from the last one (yeah, I got that one too). The transfer on this one is in 4k. Do I know what that means? No, I just know that it looks and sounds freaking amazing. I received the one disc edition but there are 2-disc and 4-disc boxed sets the the TRUE fan.  I can tell you that on the one- disc there are four commentary tracks that are chock full of information.

As a consumer, I’m planning on picking up one of the larger sets, mostly because the transfer is absolutely glorious, and I need to watch and learn more about this iconic piece of horror history. The Texas Chainsaw Massacre simply has to be experienced, no critical analysis can do it justice. Without bucketloads of gore, without the slick look of high budget, it remains one of the most bleak, atmospheric and aurally violent movies of all time.