You are here: Home / Allyson / Ben tries out an e-cigarette 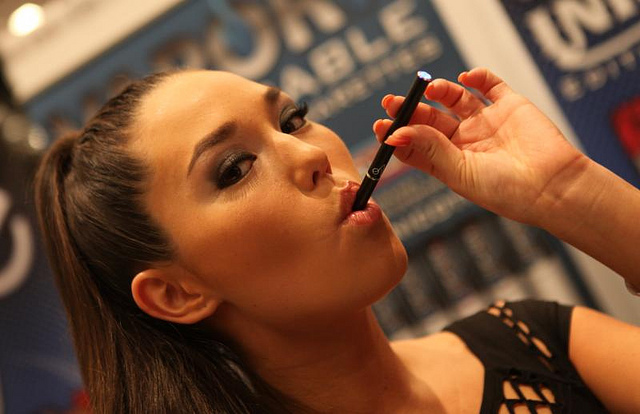 As you know my other site is called The Gin Joint, and also as many of you know I quit smoking cigarettes a couple years ago.  Recently I’ve realized the trend of people using liquid vape pens as an alternative to smoking at bars.  These days it throws me through a loop when I see people smoking inside at bars.  As an experiment one night I got curious and decided that I probably should give it a try, considering that I am a big believer in trying anything once and twice if I like it.  So I sat down next to my buddy and ask if I could have a puff, “just to see” and holy smokes (I crack myself up) it tasted really nice.

After I tried it, I asked him why he smoked electronic cigarettes and he told me that his wife make him quit smoking tobacco, however he was really happy with this alternative.  He told me just how much money he was saving by smoking his liquid vape pen rather than his normal smokes and I was AMAZED.

The costs of traditional tobacco products continue to rise as states look for ways to increase their dwindling revenue. Currently, an average pack of cigarettes sells for $6.00. States charge an average tax per pack of $1.45, with the number one state charging a whopping $4.35 a pack tax. These averages don’t count local taxing districts that are starting to add their own taxes to cigarettes.

Compare that to 21st Century Smoke® electronic cigarettes where you could save more than $1100.00 a Year: For a pack a day (PAD) smoker:

That is an amazing amount of savings.  As a former 2-pack a day smoker, I think it’s great to see so many people ditching their traditional smokes and going to something more cost effective such as E cigs and after giving my buddy’s a try, I have to say that they taste much better (mine was filled with an amazing strawberry taste).