You are here: Home / They Read / Book Reviews: Report from the Interior 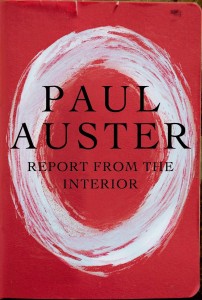 Report from the Interior

After reading Winter Journal, I became an immediate Paul Auster fan. In 2006, Auster was inducted into the American Academy of Arts and Letters and won many awards.  His prose is particular, poetic and passionate, as he determines his way into his mid-sixties, and Report from the Interior beckons to all of us who grew up in these times, the 40s to present.  Report from the Interior describes Auster’s “Portrait of the Artist as a Young Man,” although very differently than James Joyce.  Joyce uses prose and narrative; Auster utilizes his childhood through teenagedom, two movies of the times that characterized his growth as a writer (The Incredible Shrinking Man and I am a Fugitive from A Chain Gang), an assortment of letters that he wrote to his girlfriend Lydia Davis from 1966-1969 (she later became his wife) and the last section, which he calls the Album, pictures of his favorite cartoons, places and events of this time period.

In his usual profound way

Report from the Interior touches many places in the baby boomer generation.  The only period that I found a tad narcissistic was his letters, although without the letters to Lydia we would not know or understand Auster’s route to fame as a literary genius.  Like John Lennon’s letters, Auster describes the politics, intelligentsia and inertia that descend on every artist, and every period of time in the life of a writing-in-grooming.

All in all, another wonderful bout within the consciousness of a man who contains within his books the universality of us all.  I did like Winter Journal better and found it a more complete and genuine book; but that is like comparing apples to oranges, I suppose.

As his news release states…

“At once a story of the times – which makes it everyone’s story – and the story of the emerging consciousness of a renowned literary artist, this four part work answers the challenge of autobiography in ways rarely, if ever seen before.”

Report from the Interior