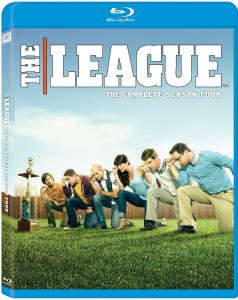 I love this show.

I have been watching from the beginning of the FIRST episode. This is one of the best, by far in my opinion, comedies out there. For me it has successfully filled the void left by Arrested Development. There are other shows that fill this void as well but this one of the few shows that satisfies my desire for quick-witted humor combined with sophomoric humor.  It’s completely a guy’s show, really I can count on one hand how many women I know that actually enjoy this show.  So if you haven’t seen the shows go out and pick up all the seasons and marathon it.  But here are a few things that happen in Season 4.

We begin with the League going to the Cowboys training camp thanks to Taco and unfortunate website mishap.  We are also treated to other misadventures such as Ruxin believing he has to get his wife pregnant to keep her from leaving him, Kevin and Jenny trying to come up with a baby name, and Pete trying to win over his high school crush.

Be warned that this season is certainly the most crude season yet.

There is definitely enough humor that goes outside fantasy football to appeal to a more general demographic. I think my favorite part of the show is that it is lauded as semi scripted which to me really comes out in the dialogue. You can tell that there are times when they are genuinely laughing at the jokes or barbs each other throws out there unexpectedly. This also adds to the chemistry of the characters and the naturalness of the show.

That being said, this is not my favorite season of the show.  There are a few too many cameos here that take away from the main characters.  There were still classic episodes but not as good as the previous three seasons but still very enjoyable and laugh out loud funny.

The League is still not for the faint of heart, and is still hilarious.  There are a bit too many cameos that distract from the main characters and their dilemmas but its still funny and a joy to watch.

Overall:  4 curses of the shiva out of 5