You are here: Home / Fun / DVD Reviews: The Damned 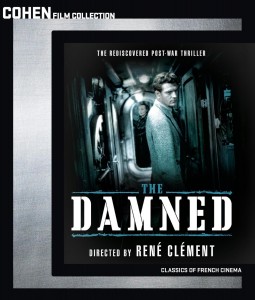 Aw hell, another classic of French cinema brought to us by the Cohen Film Group.

Thank the film gods for these awesome releases of these rarely seen classics (but please put out some American classics, much appreciated).  Here we have another classic from the same director as Purple Noon (The original version of Talented Mr. Ripley).  I had never heard of the “The Damned,” but I was eager to experience the 1947 wartime thriller.

So here it goes, a bit of a synopsis:

Oslo, April 19th 1945, as the Third Reich is living its last day, a group of Nazis and sympathizers (a Wehrmacht general, an SS leader and his “assistant”, an Italian industrialist and his wife who is also the general’s lover, a French collaborator) board a submarine that will take them to South America, where they hope to find shelter. While they sail off the shores of liberated Royan they manage to kidnap a French doctor to have him look after a wounded passenger. Dr Guilbert will be forced to share the restricted space of the submarine with the fugitives. The atmosphere soon becomes to put it lightly, tense…

I really wanted to make a sub-standard pun in this review but hell, this is a fantastic film.

This film is a lesson in claustrophobic suspense and slow-burn psychological edginess.  I’ve seen this film imitated hundreds of times and never realized that it came from this one.  There is also a hotbed of unsavory characters, where political sin hangs heavy in the scratchy black and white atmosphere.

The climax of the film inspires me to think that Hitchcock loved this film.  The claustrophobic cinematography is absolutely amazing.  My only complaint would have to be is the lack of character development. I simply never felt close enough to the protagonist to really get caught up in his plight. It’s a shame too, because the story itself is intriguing. It all just felt a little under cooked.

The Blu-ray transfer is ok but not great.

It’s not up to Criterion standards but still good for the age of the print used. The real treat here is the special features.  We are given an excellent documentary about Clement and his reputation in French Cinema, a trailer, and an interesting conversation about the film with two film scholars.

Overall, I love this Blu-Ray. Despite a mediocre transfer the film still shines.  The Damned is still entertaining as heck, the performances, photography, and script still hold up but not without a little of it feeling half baked.  All in all it’s still a great journey and great watch.

« Back to school: How to find cheap textbooks
View: The growing trend of Online Jewelry Stores »