You are here: Home / They Read / Book Reviews: Things in Ditches 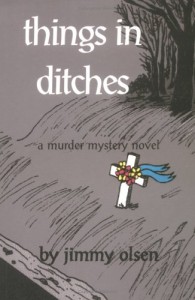 Olsen writes a mean, lean flying machine of a novel,

with characters that stumble, bumble and philosophize as they search out their good and base thoughts, feelings and actions.

Jimmy Olsen twangs his way in and out of Anne Tyler characters, Carl Hiaasen twists, and The Garden of Good and Evil suspense, and yet in every way his originality is his own.  An absolute phenomenon, Things in Ditches held me in thrall as Olsen’s main character, Dutch Cleland, a kindly butcher with a thing for his women, falls into situations that only Olsen could imagine.  Eccentric, colloquial and entrancing, once you read Olsen you are ruined for mediocrity!  Reminiscent of Flann O’Brien’s The Third Policeman, Olsen turns absurd into a verb – and a great novel.

Ernie Walleye Wertz is around 50 with the mind of an 8 year old.  He lives in Willow River, Minnesota alone since his mother died.  When he comes upon a murdered woman in a ditch while riding his strange three wheel hand built tricycle, Walleye knows it is a sign, for he knows he gets to keep anything that he finds in ditches.  Walleye flees, frantically flags down milkman Loren Petersen and Petersen takes him to Charlie Benson, Willow River Chief of Police.

Since this is the first murder that Willow Creek has ever encountered, there is no ME, so Charlie talks Sam the mortician into examining the woman’s body for a quick assessment.  She has been strangled, but not raped.  And she is pretty.

Dutch Cleland, the town butcher, loves his wife Jean.  But he has murdered pretty Vicky Johnson, a woman he had an affair with 15 years ago, when she shows up wanting him to help her.  And Dutch knows Charlie Benson will figure it out soon.  He contemplates suicide, but chickens out.  When he tells Jean what he has done, she resolves to help him escape.  Dutch decides to run to his isolated cabin in the woods to think about what he should do.

There is a blizzard coming, and WillowRiver succumbs to 37 inches of snow.  And everyone is caught that is out looking for Dutch.  That includes Len Davis, his lawyer and friend, Charlie Benson, Gordon Murdock, Vicky’s ex-con husband, and Carroll Johnson, her business executive first husband.

Sheriff Cedric Mattson grew up with Charlie Benson and they are political opponents.  The sheriff has turned into a pompous ass, and demands that Charlie bring Dutch in.  But Charlie wants to be … fair.  Mostly because Marlene, Charlie’s police dispatcher, friend and investigative support tells him he can’t jump to conclusions.

As Dutch takes off to his cabin to think about what to do, the cast of characters turns into It’s A Mad, Mad, Mad, Mad World.  Everyone’s chasing everyone, they all have secrets, and the townspeople turn to Charlie to sort it all out.  But Charlie is facing some killers he is not aware of.

This is one of the best murder mystery novels on the shelves.  The ending leaves astonished as if you have been had!  Read it if you don’t believe me!