You are here: Home / Fun / DVD Reviews: Welcome to the Punch 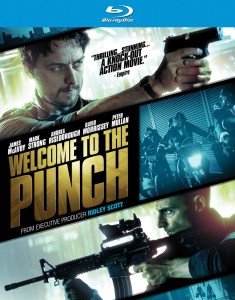 Welcome to the Punch

They are the perfect blend of action and drama.  There is a wonderful complexity to heist films such as Charlie Varrick, Theif and Refifi that create some of the most complex stories in cinema history.  I never turn down the chance to watch a heist film because no matter what they are always so entertaining.  I got a chance to review Welcome To The Punch would it hold up to the long standard of great heist films?  We shall see…

But first a synopsis…

The premise focuses on headstrong officer Max Lewinski (James McAvoy), who was thwarted in his pursuit to apprehend elusive fugitive Jacob Sternwood (Mark Strong). Their confrontation ended with Sternwood shooting Lewinski in the knee before absconding with his fellow criminals. Fate presents Lewinski with a shot at redemption three years later when Sternwood is coerced out of his refuge courtesy of his son being shot in London. Thus, Lewinski is afforded a second chance to exorcise his demons. Chaos ensues as the principal characters become entangled in an intricate web of revenge, politics and corruption.

Back to the review

For some unknown reason, I was quite disappointed with this movie because I was expecting much more. The fault doesn’t sit with the actors, because Mark Strong put in a very good performance, but I found the storyline pretty basic and in some ways, quite boring. There is a lot of gun tooting action and there are a couple of twists in the storyline, but I don’t think that I was convinced with all of the American style shooting in London.

Mark Strong is crushing it here, taking his time, exuding confidence in his own ability but never advancing beyond a steady pace. McAvoy is adequate but a far cry from the quality of his performance in The Last King of Scotland. He’s worth more than this and I’m going to brush over this performance.  The rest of the cast kind of hams it all up…disappointingly.

The movie looks cool and sounds great on Blu-ray so we got that going for us.  The special features are barebones. The view only gets treated to a behind the scenes feature and then a handful of interviews.

With gun play and slow-mo and boring character development (I must admit I walked out of the room a few times) this film was full of style, but little substance. However, some moments including the opening sequence was extremely entertaining. Every time Mark Strong is on screen is worth the watch.

Overall:  2 syringes in knees out of 5

Welcome to the Punch [Blu-ray]