You are here: Home / They Read / Book Reviews: The Fort 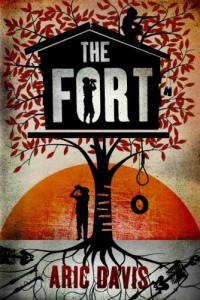 Told in the voice of Tim Benchley and his friends Scott and Luke, twelve year olds who have built a fort to play as American soldiers against the invisible Vietnamese, The Fort does not swaggle into noveldom as easily as the boys become heroes.

Matt Hooper is the villain in this novel, a Viet Nam vet who kills prostitutes as he relives his Viet Nam experiences.  A psychopath, the police are not as vigilant as they should be as prostitutes are often murdered.  But when Matt kidnaps one of Tim’s sister Becca’s 15 year old friends, Molly, the boys are scared.  And Becca is acting very strange.  One day at the Fort, the boys see a man marching Becca through the woods.  But no one believes them, so they decide to take matters into their own hands and find the killer.

Becca’s secret is that she and her friends lied to their parents.  Instead of going to the drive in movie, they went off with their boyfriends and made a lame bet.  They decided to play at being prostitutes in the section of town where the madman hunts.  And Molly gets into his car.

Rather dull, a plot that has been there and done that, Davis does produce some good scenes and the three boys are front and center.

A novel that reads fast, Davis shows talent and perhaps his next novel will capitalize on it.  Not bad, not great, rather mediocre, but still worth reading.