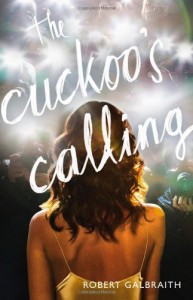 John Bristow, sister Lula Landry, an internationally famous model, has fallen to her death.  The police say it’s a suicide, but Bristow seeks out a private detective, as he is sure that it is murder.  He walks into the office of private detective Cormoran Strike, ex military who lost one leg in Afghanistan.  At first, Strike agrees with the police, until things stop adding up.  Strike agrees: Landry was murdered.  But by whom?

Strike’s a mess.  His last office (if you can call it that) temp is long gone, and there’s no one to answer the phones.  He’s broke.  When a knock comes on his door, he opens it and bowls over pretty Robin Ellacott from Temporary Solutions.  Twenty five year old Robin is wearing a new engagement ring, is in between jobs, and when she gains her balance, she meets – Cormoran Strike.  As Strike stalks the clues in Lula Landry’s death, Robin rises from lowly secretary to intelligent investigator – and Strike begins to find Robin invaluable – – but she’s looking for a real job.

Astute, intelligent, and most alluring, Cormoran Strike pulls the right strings on a complicated and deadly case and brings home the girl.  Galbraith writes like the wind, and The Cuckoo Calling pulsates and undulates in and out of a plot that stuns.  We fall in love with his characters – the all too human Cormoran who hides his prosthetic leg out of pride, beautiful Robin who is intelligent as well as gorgeous, and John Bristow, the brother with a hidden agenda.