You are here: Home / Fun / Books / Book Reviews: Once Upon a Gypsy Moon 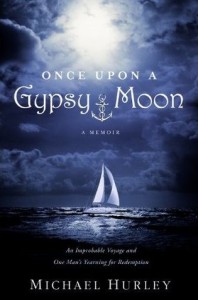 Once Upon A Gypsy Moon – A Memoir

Like Eric Best’s In My Father’s Wake, Once Upon a Gypsy Moon is about one man’s redemption and courage – and, of course, an adventure in sailing. Hurley’s story is one of many: divorce in his fifties after 25 years of marriage due to his infidelity to his wife, a childhood with an alcoholic father, and a sudden need to direct his chaotic life through his love of sailing in his 32 foot sailboat.

A previously successful lawyer, in August 2009 Hurley is down on his luck; no job, no money, no future. He decides to sail from Annapolis, Maryland to Nassau, a two year trip, solo, on his beloved sailboat, The Gypsy Moon. Although Hurley has never before sailed solo on a long trip, his faith and his nature require him to find what he really wants: time for contemplation about where his life went wrong, and a new intention to find the woman he can treasure.

Through many trials on the sea, including a 350 sail through the deadly Graveyard of the Atlantic, Hurley details his prior life while encountering rough seas: his deep need for faith, his contemplations on what has lead him off his path, his children, his alcoholic father, his ended marriage. When he encounters the final loss of The Gypsy Moon, he has sailed into port at Nassau, has remarried while on the trip, and found himself as he ships into Nassau.

Hurley’s voyage is a spiritual cleansing, trying to re-compass his life into what he believes in, in the right turns and twists, rather than the past he has devoured by taking wrong paths.

If you love sailing, you will enjoy Once Upon a Gypsy Moon. If you believe

in spiritual renewal, this is also a novel you will love. Hurley’s personal account is daunting, hauntingly honest, and full of what we all need to learn: errors are part of being human, and we can always set the compass back to the sun.

Once Upon a Gypsy Moon: An Improbable Voyage and One Man’s Yearning for Redemption

is available at your neighborhood bookstore and Amazon.com