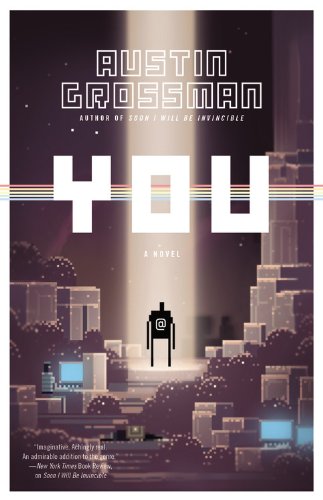 YOU sometimes stutters, sometimes sparkles, and always scintillates its way through the labyrinth of the computer game industry as well as its so very human characters. And even the few stutters bring power to the page that is as crystalline as…brilliant coding? I can’t criticize YOU for sciolism: it is almost TOO in-depth…and yet...the novel fascinates.

Grossman projects us into the world of 4 high school geeks who grow up to become eccentric geniuses who started together as 14 year olds to program games on the newest information machines: the computer.

Twenty eight year old Russell, the narrator, loses his nerdy game vision and struggles to be a “normie” – he quits the group as they leave high school to pursue the cool kids and a law degree. And yet he finds he hates his new adult life. Out of work, he approaches Black Art Games for a job, where all his old friends have risen like the phoenix into partnership and high level jobs. He is hired as a game engineer. Russell, now back with the friends he dissed in high school, his “gang,” knows he is walking a fine line, and he has not kept up with the new technology. And his old friends, Darren, Don and Lisa now own and run the most prestigious and profitable game company around. Simon, Russell’s strange best friend in high school, and the genius behind the company’s success, is dead. Simon created the WAFFLE engine, which became a runaway phenomenon in the game world, has pivoted Darren, the co founder and the others to riches and success. Black Arts Games is at its high point. We only know through Russell that Simon died in an accident and Russell remembers his best friend as he was: short, ugly, from a single family home, poor and yet incandescent.

As Russell joins the old team, he finds himself as head engineer when Darren suddenly pulls out to form his own game company and deserts Don and Lisa taking all their best gaming staff out from under them. Suddenly Russell finds himself hunting a lethal bug in WAFFLE just as the company is welcoming their newest capital investment company, FOCUS, who will provide the money for their newest sequel to Realms of Gold, a runaway favorite in the gaming world. Their newest version, Realms of Gold VII: Winter’s Crown is going haywire.

Through Russell’s flashbacks, we learn who Simon, Lisa, Darren and Don were, as well as Russell himself, in high school. And how they started at a computer camp called KidBit.

Technical, funny, fascinating, a deliberate assault on our senses, Grossman mesmerizes us as his complex characters lay out video gaming from 1971 through 2008 through Russell’s attempts to go back and play out Simon’s steps from the very beginning. He learns that the video game IS the user, not just a simulation.

Honestly, I could not let this novel out of my sight, as I sat, entranced, and slammed in and out of the mythic Four Heroes in Realms of Gold, the counterparts to the four friends who created the game. Spellbinding, deliciously creative, atrociously fascinating: I even loved the stutters. ONE OF A KIND and a great read!

hits the bookstores on April 16.