You are here: Home / They Watch / Movie Reviews: 11 Flowers 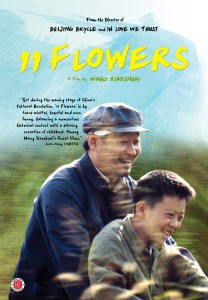 Color me excited to be reviewing this movie. I was a big fan of Xiaoshuai Wang’s Beijing Bicycle. So going into this film I knew that I would love his characterizations and storytelling methods. I did not know anything about 11 Flowers before watching it, no clue what it was about or anything. So what is 11 Flowers about?

It really is hard to define this film because it deals with so much. There is rape, murder, politics, betrayal, and coming of age all through the eyes of 11 year old Wang Han. But this film is far from exciting. 11 Flowers is a subdued, intelligent feature about a changing world in the eyes of youth. This elevates the plot from what could have been a largely political film to a very personal one.

The film feels like an autobiography almost. Early in the film Wang Han is chosen to lead his school in exercises and is told to get a new shirt. This shirt leads to him having contact with a murder. Also seeing this film through a child’s eyes really contextualizes the final days of Mao’s reign in China.

As I watched this film I felt it to be a smarter cousin of Stand By Me. They both reflected an area of the past through the innocence of children and then bring their character is to adolescents.

That’s not to say that this is a heavy film because much of it is not. We also get to experience Wang Han playing kick the can in the center of the village, see his families reaction to his first wet dream and painting with his father. The actors are unaware of the changes in their world and are more concerned with school and gossip.

The acting and directing here are top notch. I loved the attention to detail, subdued storytelling and focus on everyday life. Did I mention that this film looks great too? The cinematography is clean and breathtaking from the claustrophobia of the village to the beauty of the country.

I have watched this 3 times now and it is already my favorite film of the year so far (it’s still early). It is nearly perfect in every way, the characters captured me, the storytelling captured me, and the cinematography captured me. Making this feature one of the best I have seen in a long time. Heavy without being too heavy, smart without feeling too smart, funny without being silly, and nice without too much naiveté.

Overall:  5 soiled underwear out of 5