You are here: Home / Fun / DVD Reviews: The Sessions 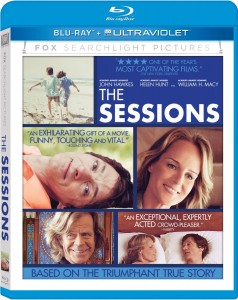 I missed quite a few movies at Sundance last year, and unfortunately this was not even on my radar until after the festival.  I was also unaware of the director’s previous work, which for me doesn’t usually bode well.  After seeing a trailer it really sunk in that this could be a good flick.  This is my experience with the film.

At the age of 38, Mark O’Brien, a man who uses an iron lung, decides he no longer wishes to be a virgin. With the help of his therapist and his priest, he contacts Cheryl Cohen-Greene, a professional sex surrogate and a typical soccer mom with a house, a mortgage and a husband. Inspired by a true story, The Sessions, follows the fascinating relationship which evolves between Cheryl and Mark as she takes him on his journey to manhood.

Is John Hawkes good in everything?

I mean really the guy is great in everything not to mention all the amazing acting going on here.  We have William H Macy in his most restrained role in a long time.  Helen Hunt is better than she has been in a long time and very deserving of that Oscar nomination.  Finally we have Moon Bloodgood who seems like just an action star but turns in a really solid performance here.  John Hawkes turns in the real performance here.  He not only delivers on the physical demands of such a role but he manages to encapsulate the emotions of a man with a broken body but a good heart.

The second reason that this film is so good is the story itself.

I did some research on line about the life of the real Marc O’Brien and the film is pretty accurate and consistent with the facts; Marc’s life is nothing short of extraordinary, especially if you consider that the film is based on an article of his that he had to type with a pen in his mouth. The people he met, the relationships he formed and how he formed them, all that is part of a very uplifting story which truly happened and is not adorned to make it more Hollywood-esque.

The audio and video qualities are nothing short of amazing and the special features are pretty great too.  We are treated to five short featurettes and two deleted scenes.  The deleted scenes are great and a lot of fun to watch.  The featurettes are OK but the one about Hawkes getting into character is excellent.

Overall, this was a great watch with very little shortcomings.

Parts of the film are underwhelming but that is shadowed by some amazing performances.  This movie is stolen by the actors. This is a great movie to watch with your significant other on a Friday night but definitely not for kids.

is available for purchase at DVD outlets everywhere.