You are here: Home / Fun / Books / Book Reviews: The Storyteller 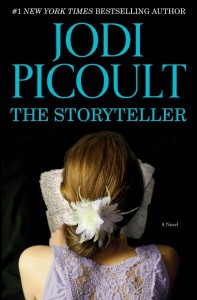 Normally, I swoon after reading a new Jodi Picoult. The Storyteller layered itself too thin for my tastes, and Picoult ambitiously takes on too much for this particular novel.

Picoult, known for her tone perfect emotional nuances and complex, compelling characters, appears too forceful in this particular novel about families, forgiveness, and the Holocaust. The Storyteller is still a powerful novel, as Picoult is one of our most beloved authors, but the qualities of her characters diffuse in the effluvia of a topic, the Holocaust and its survivors, that ripples and roars with little that is new or different.

That said, the plot. Sage Singer has a scar from her eyebrow to her cheek, and she feels like she murdered her mother, who died in a car accident when Sage was driving. Her beloved father, also dead, was a baker. Sage’s father used to trust her with the details of his death. They found it their own special way of connecting, and Sage took note of every detail: “At my funeral I want a procession…first the children throwing rose petals…” When her father cannot pay the protection fee for his little village bakery, he is killed. Her grandmother, Minka, is a Holocaust survivor. When we meet Sage, she is also a baker working for Mary DeAngeles formerly Sister Mary Robert. Mary has opened a bread and bakery called Our Daily Bread at the shrine of Our Lady of Mercy in Westerbrook, New Hampshire. Working only at night so no one can see her scar, and her deep shame in “killing” her mother, Sage attends a Grief therapy group every month, and has for years, only she cannot get past the loss of her mother and her own self image of horror at her scarred face. So she avoids people, with Mary as her only friend, as well as the loaves she bakes in memory of her father.

Then she meets an old man who appears in her grief group and comes into the bakery named Josef Weber. They become friends, until one day Josef tells her about his life, and asks her for a favor. It seems Josef is not his real name and he knows Minka, her grandmother, from Auschwitz. Only they were on different sides.

As Sage ponders the loss of family, her own expectations, and love, with all the mistakes made in between, she also ponders forgiveness, when it is possible, and when it is not.

My problem with the plot is that I knew the ending about three quarters of the way through. Also, while Picoult is one of our most talented storytellers, I felt she attempted too much, and lost our affinity, our intimacy, with her characters. Not Sophie’s Choice, but still – a novel by Picoult is always a pleasure.

« DVD Reviews: The Insider
Behind the animation scene – Wreck-It Ralph »