You are here: Home / They Watch / DVD Reviews: Sleepwalk With Me 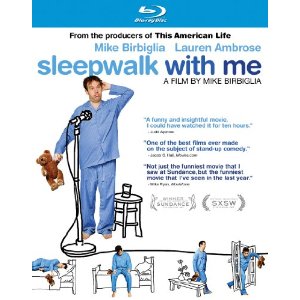 I’ve been a fan of Mike Birbiglia and This American Life for a long time now so I was prepared to love it. As a matter of fact,  Sleepwalk With Me was one of my most anticipated films of the year after missing it at Sundance. The entire narrative of the film is based on several of his true stories pulled from both his written memoir and a one-man show of the same name.

So, did Sleepwalk With Me live up to my own self-inflicted hype?

The plot to this film is strange to describe. Matt Pandamiglio (Mike Birbiglia) is a regular guy who has been in a relationship with Abby (Lauren Ambrose) for eight years and even when his sister gets married he still does not want to get married. At the same time Matt is starting to suffer from sleepwalking and chooses to ignore this problem while he tries to reach his dream goal by being a comedian working on the road.

Because it is based on his stand-up show, you’ve heard this material before, you’ll probably know what’s going to happen.

Does it take away from the impact of the film?

Maybe just a little. Unlike his stand up, this has some serious raw emotion in it. As writer, producer, director and star Mike Berbiglia walks a perfect balancing act through the movie. Unfortunately, he does not direct the rest of the cast nearly as well as himself.

I’m not really sure how to say this next, because I consider it a complement, however – many of you will take it the wrong way. Mike Birbeglia obviously went to Woody Allen film school. There’s a very Woody Allen-esque approach that he takes in the way he structures this film that seems to come easily to him. This would be impressive for any comedian, but I find it extremely special for someone making their first film. Birbiglia is able to take clear influence from Allen in the storytelling while also remaining very true to himself.

The quality of picture is ok for an indie filmmaker’s first feature. But, it definitely looks like an independent film.

The special features are excellent!

We get a Q&A and commentary with Ira Glass & Mike. We are also treated to some behind the scenes stuff, trailers and outtakes.

Overall, I feel that this is one of the most honest and self-aware films you will see this year. Even if you’ve already  read the book and seen the show, there are still many wonderful idiosyncrasies that Mike Birbiglia wanted to explore before finally put his past behind him and focus on his rising career.

I enjoyed almost every minute of this small, honest, personal film. It was what I expected – an uncomfortable trip through an uncomfortable man’s psyche, as he wrestles with inner conflicts, ambition as a comic, and regular human relationship angst.

Sleepwalk With Me [Blu-ray]

is available online and in-store