You are here: Home / They Watch / DVD Reviews: Frankenweenie 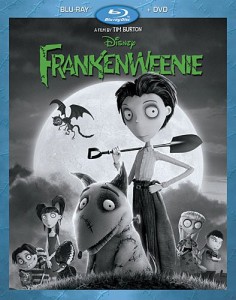 I grew up with Frankenweenie.

I had had Burton’s original short on VHS and watched it frequently. I call my parents bull-terrier Frankenweenie to this day because of it. However, I hate Tim Burton’s direction as a whole, honestly he has made like 4 great movies leading up to 1994 and it just falls apart after that. I really can’t stand any film he has made post Ed Wood (which was without question the best of his career). But I decided to dive into Frankenweenie and channel my inner child.

>>You’ll have to wait til after the synopsis to find out.

When young Victor’s pet dog Sparky (who stars in Victor’s home-made monster movies) is hit by a car, Victor decides to bring him back to life the only way he knows how. But when the bolt-necked “monster” wreaks havoc and terror in the hearts of Victor’s neighbors, he has to convince them (and his parents) that despite his appearance, Sparky’s still the good loyal friend he’s always been.

I feel asleep during it 3 times so therefore it’s a better sleep aid than Ambien. Typical for Burton: the story goes nowhere, the ending is Disneyfied, it is fun in short spurts, and he has nicely sketched the world of his childhood, which is my favorite bit here—a clean and modernistic 1950’s suburbia as was advertised to housewives of the time, and it is amazing some of the textures and light they managed to capture.

The characters and plot were very underwritten but the movie looked cool. Does this sound like Tim Burton? Yes. And I’m sick of it. And the Elfman score here sucked! That’s right! It was tired and as lifeless as the dead dog in this movie. The heart of Frankenweenie is intact — boy loves dog, boy loses dog, boy reanimates dog to amusing ends — and the nods and direct parallels to Frankenstein are a clever delight. However there are so many dead-end subplots and emotions and motivations that I give up.

This Blu-Ray looks and sounds amazing and the special features are ok too. We get treated to the original Frankenweenie short film, a new short film, and a really cool behind the scenes feature. There are also some lame features too such as a music video and something about the tour exhibit.

Can the overall look and amazing style of the film

No, however bits and pieces were very good and fun. As a whole this film is just disjointed and lost. It is still Tim Burton’s best feature since Ed Wood.

Overall:  1.5 Stupid Godzilla references out of 5