You are here: Home / They Read / Book Reviews: The Boy 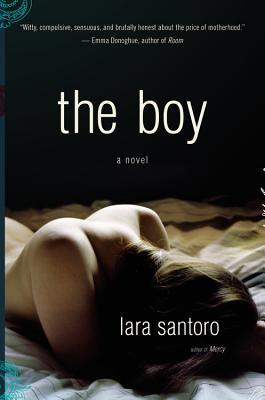 In a voice akin to only herself, Lara Santoro rips words into sentences that tremble then tumble from her pen into writing that shrieks of poetry, adorns with originality, and consumes pathos of characters.

Anna, divorced, and an ex adventurous, is 42, mother to circumspect and precocious Eva. When Anna falls into lust with her friend Richard Strand’s young 20 year old drifter son, the words – and situation – ramp into a chaos of emotion that Anna can neither handle nor give up. And there is little Eva, whom Anna adores, compelling the story.

Although the plot has appeared before in variation, by Sue Miller in The Good Mother and in Kramer versus Kramer, the sensuousness and complicity of Santoro’s language, her writing, poses itself on the cusp of fine literature. I pored over her paragraphs, lyrical, tense, and utterly original. Sanatoro’s themes, the illusion of motherhood as a self fulfilling prophecy, warps with her protagonist, ex-alcoholic and flawed Anna, Wild Child Anna, a career journalist who finds herself running away from her newborn baby, Eva, with a fierceness as overwhelming as Anna is confused. When she and rigid, unfeeling Eric divorce, Anna finds herself as Eva’s caretaker. Anna quits her job, hires a Mexican nanny, Esperanza, who is as flawed and original as Anna herself, and they create a close and abiding family, pivoting around Eva, who proudly assigns her mother tasks. Anna and Eva and Espi bond deeply, and Eva’s properly British ex husband continues to drain her verbally via phone from London. Anna’s best friend, Richard Stark, has rescued Anna before and they are dear friends and neighbors (they live next door to each other).

At a party at Richard’s house, Anna sees his young son, Jack. They stare at one another, and synapse of lust begins. Anna tries to avoid Jack but the boy keeps cornering her. They become lovers – in Anna’s soul, she has focused her entire life after the divorce on Eva, and she desperately needs “something for herself.”

In Anna’s humanity, she knows the liaison is a bad mistake. But she cannot stop her ambivalence about being a good mother with her need to nourish a part of herself. She needs the boy.

As Anna careens out of control, Espi betrays her. And the plot deluges us with anguish. And yet we as women, as mothers, have all felt what Anna has felt whether we acted upon it or not. For we have embraced the tedium of raising children as single mothers, the enormous void of giving up our lives for our adored children.

Santoro is unstoppable, even when the plot veers, tilts and crashes to an inevitable and predictable end. It didn’t matter to me. Santoro has the ability, talent and guts to prove herself a Fiction Star. Fast, intricate, alluring look at what we all desire as women: everything. Loved it!

The Boy: A Novel