You are here: Home / They Read / Book Reviews: Heat 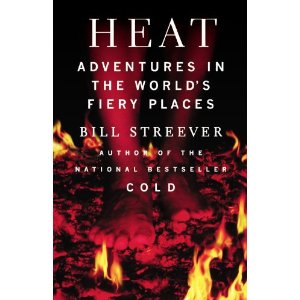 Alaskan scientist Bill Streever travels on a personal journey with his wife Lisanne to discover and report back the nature of heat.  Sounds heavy?  And yet, Streever brings us into the font of wildfire and the firefighters and victims with such severe burns that their skin melts.  They travel into the mouth of Hawaiian volcano land, the lava scorched landscape not hot enough: they wait for the volcano to erupt into activity.  Nuclear power is a term we do not want to hear about, we ignore it.  Steever cannot.  He goes into the Big Boom, the scorchlands of the US blastings in the 50s, the Japan that captured victims on camera.  Firewalkers are Streever’s Achilles Heel.  He communicates constantly with instructors who teach people how to walk on hot coals up to 1500 degrees F without blistering their naked feet.  He wants to learn how.  He loves the intensity and drama of fire and pursues it like it is his lover, his beloved.

This journey pulls us into its vortex.  Streever has a way about him, a way of transforming the combustion with fact and human tragedy, and his prose reads like fiction.  Houdini and his thoughts appear throughout, as well as Pliny the Elder down to Zoroastrians to witches burned at the stake.  And firemen who lived through horrendous burns.

I have two sons.  They both fight fire.  As firemen, they never talk about their experiences.  And for the first time, I saw fire through their vision, Streever’s vision.  Like stars, like the sun, there is both beauty and horror in fire.

Compelling, fascinating, and full of deep intent and history, Streever chases after fire like Cloud Chasers chase after tornadoes.  Absolutely stunning, we watch as Streever holds his palm over a candle flame for 5 seconds.  The pain is excruciating.  In both personal, historical and factual conflagration, Streever steams his way into our living rooms.  This is a book that blasts its way through page after page, as Streever follows flames, its victims and its progenerators, its thrill for mankind, the intensity of wild fires and the danger of fighting it back, the magnificence of a cloud eruption of lava, and the wrenching sight of people lingering in burn units with such neurological damage they do not survive.    Unforgettable.

is available for pre-order NOW ON Amazon.com