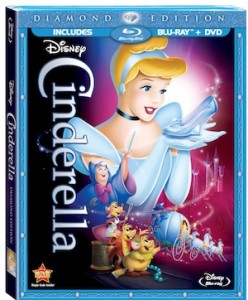 I’m pretty sure I am the world’s only person who doesn’t like the Disney originals. Yep I’m a hater. Why do you ask? Because I’m young and did not grow up with these films, so don’t expect me to like them. Also, I’m spoiled on Disney/Pixar films with the amount of dimension and care taken to produce one of those how can you not love it (with the exception of the Cars films). How much do I hate Cinderella? Find out after the synopsis!

Cinderella is living happily with her mother and father until her mother dies. Cinderella’s father remarries a cold, cruel woman who has two daughters, Drizella and Anastasia. When the father dies, Cinderella’s wicked stepmother turns her into a virtual servant in her own house. Meanwhile, across town in the castle, the King determines that his son the Prince should find a suitable bride and provide him with a required number of grandchildren. So the King invites every eligible maiden in the kingdom to a fancy dress ball, where his son will be able to choose his bride, will it be Cinderella?

The problem with criticizing “Cinderella” is that many of the criticisms aren’t really related to the film so much as to the story it’s based off of. Some feminists decry her reliance on a prince to save her from hardship (a common theme in Disney films). Others have the more general criticism that the film portrays women as little more than future brides with no life outside of her husband. You could also say that the film offers no real hope for those looking to it for inspiration. A magical hag with a wand saves a girl in a desperate situation at the 11th hour. Without her, Cinderella would be left to toil and the prince would have chosen some other girl to be the princess. Perhaps realizing how dull the main characters were, the animators chose to give excessive screen time to the movie’s comic relief, Cinderella’s friends, the mice. Granted, these characters are amusing. Even so, when the comic relief steals the show from the principals, well, let’s just say your story has some problems.

Is this my least favorite Disney classic?

No, but I still find it tedious.

The real prize here is this entire Blu-Ray disc has to offer. Cinderella, like many other Golden Age Disney animated classics that have come to Blu-ray, arrives with a stunning 1080p/AVC MPEG-4 video transfer free of encoding imperfections or, really, any major preservation or restoration flaws to point to. With regards to audio, Disney brings two lossless options: a DTS-HD Master Audio 7.1 surround track and a single-channel DTS-HD Master Audio presentation of the film’s original mono mix. The special features are also fantastic! Tangled Ever After is amazingly fun and a joy to watch. There is a pretty cool alternate opening sequence done with storyboards. The Disney second screen feature that I did not get to watch. A feature about the revision at Disney parks fantasyland was really cool and am excited for the completions of that! Finally there was a feature about Fairy Godmothers that was really nice too.

Overall, should you buy this for your growing family?

Yes. Let me warn you it could create unrealistic expectations when it comes to love and marriage later in life. But it’s definitely not the worst of the animated classics but it is far from the quality and depth that Pixar gives us today.

is available for purchase for your Disney collection

Overall: 2 glass slippers out of 5