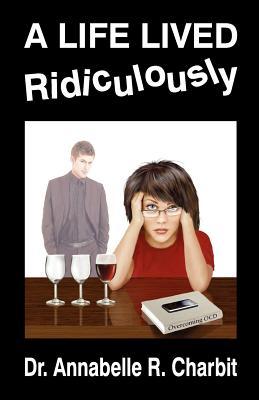 Charbit’s protagonist, a 28 year old unmarried Jewish woman named Maxine is full of depth, humor and liveliness. As a debut novel, A Life Lived Ridiculously could use a little polish, and yet Charbit goes beyond the stereotypes to create a lilting taste of family angst. Maxine’s family of course wants her to be married – desperately.

Maxine works at a lab while attending the equivalent of her Masters degree in science, planning to pursue her PhD. English and saucy, Maxine lives in London and at 28 has finally moved out of her gorgeous bedroom in her wealthy parent’s gorgeous house. Her OCD is not the usual kind – she obsesses about thoughts, and the number of possessions she doesn’t want to have instead of rituals. For Maxine wants as little as possible for then she doesn’t have to actually count them or keep track of possessions. Her brother and family think that she is on this side of crazy, but Maxine’s almost empty apartment keeps her on track. The fewer outfits, the fewer shoes, the fewer possessions she has, the happier that she is.

When a friend introduces her to a strange single Jewish man, Sam, Maxine views him with revulsion. He’s dreary, badly dressed, badly stopped, and just plain ugly in Maxine’s eyes. But Sam turns up the charm and goes after Maxine ferociously, and Maxine starts hanging out with him as a friend. After a while, when Sam talks about how he wants to have sex with her, but he’s dying of cancer and only has one testicle, Maxine falls hard for weird Sam, and becomes obsessed with him. Sam’s sordid game is a non relationship relationship, and he disappears frequently, telling Maxine that he is in the hospital with his tumors growing aggressively. As Sam turns on Maxine’s pity button he starts playing retreat as she begins to chase him shamelessly.

Maxine’s friends are torn; Rose feels sorry for Sam and tells Maxine to be patient with the sweet man, and Tina finds him “off” and dangerous. When Maxine’s own father warns her of Sam’s danger, Maxine follows Sam more intensely, knowing that something is off, but not sure what that something is. After all, he’s a dying man.

I loved that Charbit pulls us deliciously and dangerously into Maxine’s world gracefully and seamlessly; we have all had these kinds of relationships, and Maxine’s world is so carefully compiled, chapter by chapter, that I felt I was Maxine in the throes of co-dependency! Ms. Charbit’s talent is in her characterizations, timing and emotional nuance. A very good first novel, and I believe Charbit’s next novel will be more compelling, as she shows every sign of an author to watch. As Maxine goes from clueless to savvy, and Sam’s dreary tale comes out, we can’t wait to turn the page to find out what Maxine will do. Well done, good read.