You are here: Home / They Read / Book Reviews: The Passion and the Paradox Marilyn 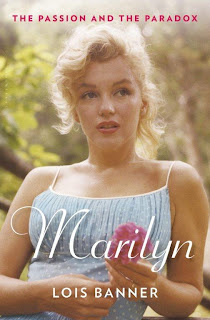 Marilyn: The Passion and the Paradox

The good, the bad and the ugly sums up this rather academic treatise of Marilyn Monroe’s chaotic life.  I felt ambivalent about this biography.  The feminist slant thrown against a chronology that skips back and forth, and the fact that Banner claims that Marilyn Monroe was a feminist before her time felt false to me.  However, the factual dissertation of Marilyn’s life is well done and interesting.

I don’t believe that we should extract stereotypes and archetypes into the lives of movie stars.  Their lives are put under a microscope, and surely enough has been written about Marilyn Monroe that she has become a legend versus a person.  And yet, Banner insists that Marilyn fought back against the movie giants, and moguls and men that exposed and abused her and held her back.  The pivot point however, is that Marilyn Monroe, Jackie Kennedy, even Hillary Clinton were all intelligent women caught in a cycle of abuse.  To hold the abuse up as something we should iconicize is even more abusive to me.  These women sought out men that fed their needs, and their men provided what they desired.  Yes, they are tragic as well as courageous, but they are no different than many women and men in a society where power and control come with fame and fortune.

Banner does define and broaden the actress’s talents, intelligence and health issues as well as her mood swings.  The 1940-1960 movie mogul giants did own their actors and actresses and yet Banner points out that Marilyn had a brain and used it.  Her creation was herself.  And yet Marilyn slept with anyone who could help her with her career.  This is not a criticism; it simply is a fact that Marilyn played the game as well as the men who owned her.

With all of its problems and the boredom of Banner’s academic writing, Banner has given a cursive look at a woman who was complex, creative and certainly an icon for her beauty.  And yet, Monroe still died a victim, sadly, whether she was murdered as Banner suggests by the Kennedy brothers, the Mafia or at her own hand.  Lots of inconsistencies and lots of interesting facts create a biography worth reading but not always unbiased.  Still, I could not put it down.

Marilyn: The Passion and the Paradox

is now available on Amazon.com