You are here: Home / They Watch / DVD Reviews: Brake 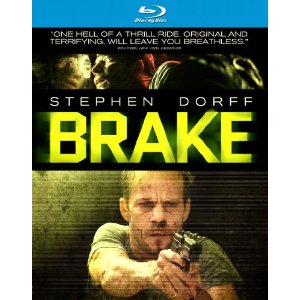 Brake
Now, I do admit that I’m not the biggest fan of claustrophobic movies, as I would call them. This genre of movies that are set in a small confinement such as “ATM”, “Buried”, “Panic Room” are ok but don’t hold up.   It’s not like I hate those movie but it’s just so that you can only do so much with its concept, before things are starting to feel stretched and worn out or just incredibly far fetched.  But, did I enjoy Brake?  Lets see!
Jeremy Reins (Stephen Dorff) awakens, confused and disoriented. He has no idea where he is or how he got there. It’s totally dark, apart from the red light of a digital clock, which seems to be on countdown mode. He can barely move or breathe. He quickly realizes he’s in a clear box made out of either glass or some industrial strength plastic.  Various sounds and sensations make it clear that he’s in the trunk of a car, which is now on the move. He gets hold of a man who says his name his Henry Shaw (the voice of J.R. Bourne). It seems he too is being held captive in a clear box in the back of some automobile. Through their many exchanges, we learn that both Reins and Shaw are Secret Service agents. What next?
Here’s the deal this – movie is not that good but its entertaining as hell!  Exciting things happen, one right after the other. The car is pulled over by the cops. There’s a shootout, leaving a small hole in the clear box. Reins even gets ahold of a cell phone.  Its like an episode of 24 set in the trunk of a car.  The pay off here is weak but it’s about the journey not the destination.
Ok…Stephen Dorff is actually a damn fine actor.  I really hate to say it but he crushes his role here.  He dominates his role and is showing off as an actor every moment of this film.
The film looks and sounds great I have no problems with the quality here.  There are only a couple of special features here, which is a bit disappointing.  However there is a nice making of feature that was beyond the 5 minutes of patting each other on the back and there also is a music video.
Overall, we have a solid flick that unfortunately the ending does not hold up to the quality of the rest of the movie.  That has been the case a lot these days.  So, writers this film shows you that you don’t need to get too clever in the third act it just might ruin sh*t.  Stop, sometimes a twist hurts, I’m looking at you M Night Shamalangadingdong.
Brake is available on video racks in stores around town.