You are here: Home / They Read / Book Reviews: Where’d You Go Bernadette? 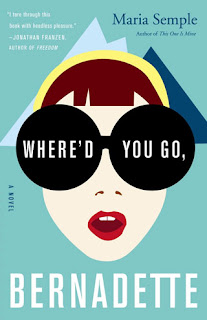 Balakrishna (Bee) Branch, an eighth grader at Galer School (“a place where compassion, academics and global connectitude join together to create civic minded citizens of a sustainable and diverse planet”), has done it. Bee has made perfect grades the entire way though her private middle school. She calls her parents Bernadette Fox and Elgin Branch on their promise to give her ANYTHING SHE WANTS for graduation if she got perfect scores. Bee wants the family to go on a trip to Antarctica.

As Bernadette grapples with the “gnats,” those other mothers at the school who hate Bernadette because she refuses to engage in becoming a school community mom, she makes enemies of Audrey Griffen, whose son Kyle is one of Bee’s classmates. Kyle is a druggie and bully, but Audrey sees him as a gifted student. As Semple creates “catastrophic events” around Bernadette and Audrey, we hysterically laugh as she realistically strategizes every stereotype through her characters. Bernadette, once a world famous architect, is now embedded in getting Audrey off her back. Audrey manufactures tall tales, as she claims Bernadette has run over her foot going through the school line, and tells Bernadette she has to get rid of her blackberry vines that are ruining Audrey’s home’s foundation. Bernadette pays for the foot, and pays for the vine removal through her Indian online PA, who does everything for Bernadette because Bernadette is agoraphobic. When a giant mudslide starts at Bernadette’s house (due to the vine removal), and destroys Audrey’s house while the parents of Galer School are having an important meeting there, chaos breaks loose and Bernadette wants to run. Much as she hates traveling, Antarctica doesn’t sound so bad.

Elgin is a cult hero at Microsoft. Microsoft bought his animation company out and Elgin has been a big wig at MS ever since. He is working on Samantha 2, a robot that will do everything for people who are disabled and veterans, who can’t speak, hear or move. It’s the day’s flavor at Microsoft – until it isn’t anymore. When Elgin falls in love with his crazy admin, Soo-Lin, and she gets pregnant, Antarctica doesn’t sound so bad to Elgin either.

But Bee is the best 15 year old character to come along in ages. She copes with her parents’ insanity, living in the falling down mansion that Bernadette bought to “do over” in her architect stage, with buckets all over catching rain from the leaking roof and exposed beams. She REALLY just wants to go to Antarctica.

Hysterically funny, clever and witty, this novel takes laughing to a new level. Well written, with a love story, quirky characters, subplots that have us thinking of all of our dysfunctional friends, and a kid that excels at just being a kid, Semple has a definite hit on her hands. Subtle, creative, and just plain great writing prove this novel to be a must read – you’ll never look at family and friends the same way again! Superb read not only for the summer but all year round, even if you live in Antarctica~!