You are here: Home / They Watch / DVD Reviews: Wilfred Season 1 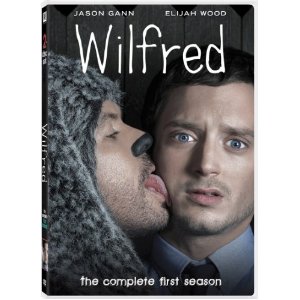 Wilfred The Complete First Season
I really dig FX’s line up.  They play the most honest and daring programs on television.  It is rare that TV take chances like this but it really works.  Everyone already knows how I feel about The League, Archer, and Louie, which bring us to Wilfred the only one in the line up that I had not previously seen.  My ex caught an episode but said it was not worth a watch so I decided to skip it.  What a stupid mistake on my part.
So what is Wilfred?  Some sort of Fu**ed mash-up of Mr. Ed, Harvey and a lot of weed.  In other words…It’s absolutely amazing.  So the show sets it self up in the first episode very well.  Ryan (That hobbit guy) attempts suicide when he comes to (failing miserably at suicide) his neighbor drops off her dog (Wilfred) that appears to Ryan as an Australian man in a furry dog suit.  The series follows Ryan as he emotionally grows using a new theme of personality each episode (such as Acceptance and Anger).
Here is the deal.  If you cant handle a man in a dog suit taking bong rips, humping teddy bears and drink beers then this show is not for you.  But it really is a fun show about psychology because Wilfred is just a representation of Ryan’s Id.  Wilfred goes through each episode just doing whatever will make him happiest (weed and humping “Bear”)
Really, the setup for this show could go south quickly but great writing really makes this show shine.  James Gann is amazing as Wilfred, he makes me laugh out loud multiple times per episode.   A dirty talking Aussie in a dog suit, what’s not to love?  His chemistry with Wood’s Ryan is fantastic, with Ryan’s straight guy routine one step behind Wilfred’s insanity.
There are a few fun cameos here too that I will not give up.  The show’s weak point is the love intrest and Wilfred’s owner Jenna (Fiona Gubelmann).  She was a bit underused but it looks like she will be properly used in season 2.
The special features are left with much to desire. Some footage from last year’s comic con, and life after film school feel out of place here.  There are montages of the weed smoking scenes and Wilfred “stuffing” Bear.  Some deleted scenes round out the package.
Overall, Wilfred is proof that television now is far more progressive than cinema.  This show is risky but pays off emotionally and with some serious laughs.  There really is nothing on television quite like it.  If you like absurd comedies with some dark beats than this is for you!
Wilfred The Complete First Season  is available NOW
Ratings are based on a 5-star scale
Overall: 4 humped bears out of 5
Review by Bro’ B – Ben
We received product for our review. All opinions are our own
« Fitness Reviews: Marika Venus T
Fun: The Odd Life of Timothy Green »