You are here: Home / They Read / Book Reviews: Serpent’s Kiss 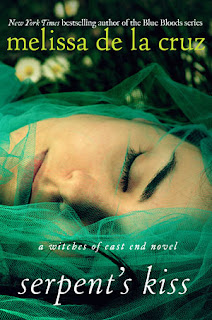 Author: Melissa de la Cruz
ADDICTING!  Anyone who’s read The Witches of East End, de la Cruz’s first novel of bewitching Joanna and her daughters Ingrid and Freya, has to be shouting-ramping-screaming with joy over the return of our favorite witches, for the enchanted threesome reappear in Serpent’s Kiss.  I was one of those readers enchanted by The Witches of East End, so I couldn’t wait to grasp her new second novel in my hot little hands – so here we go!
North Hampton is a little town on Long Island, but it doesn’t show on the map.  Quaint, surrounded by the sea and full of certain “characters,” the town is home to beguiling Joanna, master of raising the dead, lovely blonde Ingrid, who sees the future, and incorrigible fire haired Freya, who casts love potions into the drinks she mixes at the North End bar.  The witches are back, and now Freddie, their brother who has been serving time in Limbo, has swooped in to create even more chaos – if possible.
It’s October in North Hampton, and Freya and her fiancé, Killian Gardiner, are concocting drinks as they co-bartend at the North End.  Freddie, Freya’s brother, has just escaped from Limbo, sentenced to a crime he didn’t commit for the last century.  And now Freddy has accused Killian of setting him up as the destroyer of worlds (his crime).  But Freya, right smack in the middle of the two men she loves, knows Killian simply cannot be guilty – she’s known him, literally, forever, and his samba to her mamba is too enchanting to pass up.  She convinces Freddy to give her a chance to prove him wrong as she decides to prove Killian innocent, and find the real destroyer of the bridge between worlds.
Meanwhile, sister Ingrid, a 34 year old virgin, meets a cop, Matthew Noble, and sparks fly.  Only – Matt does not believe in magic!
Joanna is summoned by a dead spirit – and things ramp up as the family and their friends gather at a Thanksgiving reunion.  Throw in Joanna’s husband who wants her back, and some bad thingies flying around like bats, and the fun begins.
Fierce, intrepid, funny, with startlingly real and adorable characters, Serpents Kiss gives up the Beauchamp witches and their strange little town once again.  Terrific read, as de la Cruz is simply a wonderful writer, and she could not stereotype her witches if she tried!  Reminiscent of a young Alice Hoffman, but deliciously different enough to keep you awake all night long!  Enter Serpent’s Kiss – and its land of enchantment – and then WAIT like the rest of us to devour Melissa de la Cruz’s next novel – coming soon we hope.  LOVED IT.
Serpent’s Kiss: A Witches of East End Novel

arrived on bookshelves and kindles this week.


Ratings are based on a 5-star scale
Overall:  4 Review by Broad “A” – AvaWe received a copy of this title for our book review. All opinions are our own.
« DVD Reviews: Curb Your Enthusiasm Season 8
DVD Reviews: Perfect Sense »