You are here: Home / They Read / Book Reviews & Giveaways: The Demands 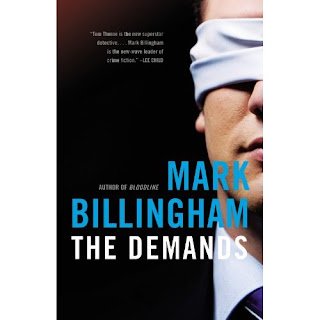 Author: Mark Billingham
A writer’s crime novelist, Mark Billingham joins the ranks of Michael Connelly, Matthew Jones, Thomas Mullen, Donato Carrisi, the great Lawrence Block – you know the ones!  The Demands brings back Detective Tom Thorne (In the Dark and Bloodline) in another pitch perfect tale that tantalizes, with a plot that retracts and contracts.
Billingham’s characters refuse to stereotype; as much a crime novel as a study of relationships – criminal, juvenile, ethnic, political, cop to cop and hostage to hostage taker, Billingham does it all, creating an atmosphere frenzied and frantic.
Detective Helen Weeks and banker Stephen Mitchell have stopped in their local convenience store.  Helen knows the owner from coming in every morning for her hike of java.  Javed Akhtar, the owner, has always been polite and calm.  As if watching from afar, Weeks and Mitchell witness three teenagers sway into the store, opening cans of coke before they purchase them.  Akhtar becomes incensed, and chases them from the store with a bat.  He then turns on Detective Weeks and Stephen Mitchell with a gun, and forces them to handcuff each other to a radiator in the back room.  The calm South London store owner has become incensed and violent. Akhtar locks the door, pulls down the shutters and Helen thinks of her one year old son.  Simultaneously, Akhtar demands that Detective Weeks phone Detective Tom Thorne, Homicide.  It seems that Thorne had been the lead investigator in the arrest of Akhtar’s youngest son, Amin, was arrested for killing a kid he knew when the kid attacked Amin and his friend.  Amin got the knife away from the teenager and killed him with it.  The judge sends Amin away for 8 years to juvie detention for manslaughter, with an almost unheard of sentence of 8 years.  And Amin has committed suicide in the detention hospital ward after another prisoner slashed his face.
As Thorne and his partner Sergeant Dave Holland reach the scene of chaos outside the closed store, he meets the police negotiator Sue Pascoe as well as Homicide detectives.  They call Helen on her mobile to find out what Akhtar wants.  Akhtar wants the truth about what happened to his son.  He knows Amin would never commit suicide.  Thorne sent his 14 year old son to prison and Akhtar demands that Thorne find the truth – before he kills the hostages.
As the clock ticks, Sue Pascoe finds herself head to head with Detective Chivers, ex military, from the Homicide squad who wants to storm the door.  Sue wants to save the hostages.  Helen Weeks tries to keep the situation calm inside, but as the days tick off, Stephen Mitchell crashes and he and Akhtar scuffle.  The gun goes off.  Stephen lies dead.  And Helen can’t say anything to the negotiator, the crime squad outside or Tom Thorne.  If she doesn’t collude with Akhtar, who is in turn violent, remorseful and anguished, her son will have no mother.  As a police officer, she knows it will cost her her job – but she would rather come out alive than employed.
Thorne and Holland strike out and drive out to the detention center first.  And they start finding clues that don’t add up.  And the clues lead them to a terrifying set of circumstances that point to some very high up officials who have created Amin’s death.  And Thorne has to tell Akhtar the terrible circumstances that his son was involved in.
Evocative and seductive, The Demands humanizes its characters as Helen Weeks, Sue Pascoe, and Tom Thorne have to face their own defects in the face of death.  And murder.

is available for purchase at bookstores nationwide.


We received a copy of this title for our book review. All opinions are our own.

« Movies: Save on these DVDs!
First peek: Wreck it Ralph »