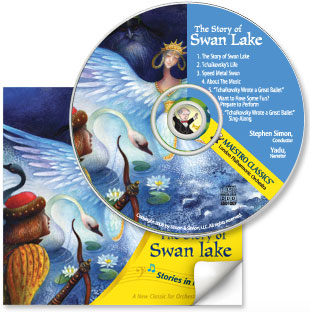 The Story of Swan Lake

“Once upon a time, long, long ago, when magic was a respected art…” So starts Maestro Classics’ story of Tchaikovsky’s Swan Lake. Tchaikovsky’s music swells, entrances, spills onto your lap and the Grand Waltz envisions princes and princesses swirling and whirling in the Palace ballroom….once upon a time, and a long time ago. “It was a magnificent ballroom, everyone in their finest, ladies with rings on their gloved hands as the orchestra played inviting music.” We have all seen Swan Lake and thrilled to Tchaikovsky’s magnificent composition, even if only in the movie Black Swan. As our children ballet en pointe and pas de deux to this great ballet, Maestro Classics’ exquisite narrators, Yadu and Bonnie Simon, delight children with the story of the Swan Queen and her beloved Prince Siegfried. As many times as I have danced the ballet as a child and as many times as I have seen Swan Lake I have never heard the story or known anything about the great Russian composer, Tchaikovsky. While I purchase Maestro Classics for my kids, I also revel in listening to their wondrous renditions of music and narration and the history of the greatest composers of our world. In a word: if you don’t provide your children with the why of things, they just go through the motions. When at ten I danced the ballet, I had no passion although my technique was perfect. No one ever told me the story! And children, big and small, love stories.

As Yadu narrates, we hear the tale of the young prince. The king and queen have decided that for Prince Siegfried’s 21st birthday they will throw a grand ball and invite all the princesses of the land – for it is time for the prince to marry and he shall make his decision the night of the ball. The Queen also gives Siegfried a crossbow, which excites him much more than marrying without love to please his parents. As the Grand Waltz enters the room and the air tingles with music, and the guests sway and breeze against the rapturous music, Siegfried sneaks away with his crossbow and finds himself at the edge of a fantastical lake. He sees a vision in white – a gorgeous swan floats with a crown on her head. Around her, her swan sisters dance around and about her. As the elegant swan swims to the shore, she tells Siegfried about the evil magician, Von Rothbart, who has placed a spell upon herself and her sisters. She is a true princess, but will remain a swan until a prince declares his undying love and faithfulness to her with all his heart. Then, she can resume her human form and she and her sisters will be free. As the music glistens against the mirror of the lake, and the prince and Princess Odette float into the waltz, they both fall in love. The prince tells Princess Odette he must announce his decision – the choice of his bride – by midnight and to meet him at the palace, for the princess is in human form from dusk till dawn. The prince returns to the grand ball, as Tchaikovsky’s brilliant etudes rise up to the stars and all the party dwellers rejoice in his grand music. STOP! Von Rothbart has turned his own daughter, Odile, into the likeness of Princess Odette – except she is dressed all in black! As the prince sees her he thinks she is Odette although it is far too soon from midnight. He grabs Odile in his arms and swings her to the rasps and swallows of the grand waltz! Outside, Odette appears and realizes what has happened. The prince turns and sees Odette and realizes that he has been tricked. He runs to follow his love, the Swan Princess, and she leaps off a cliff to crash into the violent waves below. Prince Siegfried jumps right behind her and as the curtain goes down on Act II, the Prince and Princess Odette rise to the heavens together entwined in their love forever in a white boat as the Swan sisters gaze in awe.

The most loved of all composers; Tchaikovsky took a big risk in composing for ballet (The Nutcracker, the Sleeping Beauty) as composers at the time saw ballet as a folly. But Tchaikovsky, an overly emotional and sensitive little boy who adored and lost his mother at 14, grew up to compose the most emotionally intense music ever heard.


With every note, as it surged into my living room and my granddaughter Libby and I danced the Waltz, the music of Tchaikovsky filled my heart as it never did when I was dancing ballet as a child. And the gift that Maestro Classics gave my granddaughter was priceless – as is all great music. The audio CD also contains Speed Metal Swan, with world famous guitarist Joe Stump transforming Tchaikovsky’s brilliant composition showing the music as timeless. About the Music reveals the different popular dance music that the composer included. Tchaikovsky wrote a Great Ballet gives children a funny song to help remember the theme, and Want to Have Some Fun? Prepare to Perform presents children with a song and dance number to dance to and sing to. Tchaikovsky Wrote a Great Ballet Sing-Along seals the deal with a string quartet as an accompaniment. The trumpets, the strings, the piano all become alive as Swan Lake triumphs with joy and sound.

I cannot tell you how much I ADORE Maestro Classics. You really have to experience their audio DVDs for children to appreciate them and love them as I do. Libby screams with delight every time I get one to review. Her dance classes become more real to her as she learns who the composers were as children, how they had to fight to compose their dreams and hearts, and how the music creates tympanic harmony! And she loves the fairy tale stories behind the great ballet compositions. Always a joy, a Clear Five Points for the London Philharmonic, Stephen Simon, conductor, Bonnie Simon and Yado as narrators and for all the Stories in Music that Maestro presents in such a delightful format. I WANT MORE!


The Story of Swan Lake

can be purchased at Amazon.com or directly from Maestro Classics

Review by Broad A: Ava

We received a copy of this title for our CD review. All opinions are our own.