You are here: Home / They Watch / DVD Reviews: The River: Season 1 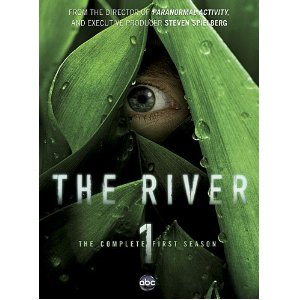 The River: The Complete First Season

The fall TV season is a crapshoot.  Without question there is a Lost clone in the mix. It’s true that its usually rolling snake eyes.  This time it was not.  The show itself is a supernatural themed horror filmed à la documentary style. A documentary style show that seems to have gotten rid of the shaky camera styles and some of the other annoying camera techniques that some has learned to not like.
The pilot was decent enough; however, I do not believe the show really finds itself until after episode 4 or 5 where it really starts to pickup. There is an adventure team similar to the TV Show Destination Truth that is sent to the Amazons most remote areas to find a missing adventure TV star. Along the way the encounter ghosts, possessions, plagues, a mysterious tribe of headhunters and also a shadowy group of natives that seem to resemble angels? They seem to have scars on their back below their shoulder bones where they apparently have cut off their wings. OK so now we are getting somewhere!
You can really tell the Spielberg aspect of this show, with all the dragonflies who look like they came out of a twisted Disney film, and the safe adventure aspect of the journeys in the amazon. Almost like Romancing the Stone with horror elements.
The Complete First Season DVD collection features excellent bonus material fans of the series will enjoy. The release includes commentary on a few episodes; deleted scenes; and “making of” feature.
All and all, I do enjoy the show and seem to be even more excited after each episode that this is worth taking an hour out of my Tuesday to follow their journey. Hope it keeps on flowing because I have many questions and looks like this show might actually give us answers!! There’s always a chance you take getting into a NEW show, but for me something new and different like this IS worth the chance.
The River: The Complete First Season

is available for purchases NOW!Ratings are based on a 5-star scale

Overall:  4 keep this show on the air out of 5 Review by Bro’ B – BenWe received product for our review. All opinions are our own