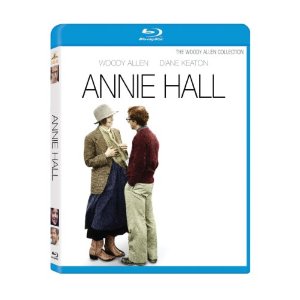 I did not get into Woody Allen’s films until I worked at the video store in high school. Before then I was aware of his films but I did not really enjoy them (except for Sleeper). When I was 17 I developed an intense love for Woody Allen’s work. Starting with Annie Hall.

Annie Hall chronicles the romantic adventures of neurotic New York comedian Alvy Singer and his equally neurotic girlfriend Annie Hall. The film traces the course of their relationship from their first meeting, and serves as an interesting historical document about love in the 1970s.

On paper, this might not sound particularly funny or romantic, but Annie Hall is both non-stop hilarious and weirdly touching, a collection of cleverly ridiculous vignettes and a sadly accepting rumination on the fact that most relationships just don’t work over the long haul. In fact, this film is so funny precisely because it’s depressingly clear-eyed about how futile love and life can be.

Annie Hall is a riot, with a razor-sharp script that lets Allen riff on every topic imaginable, from anti-Semitic conspiracy theories to Sylvia Plath. It is easily Allen’s most digestible film. The blu-ray looks and sounds great but has no special features. 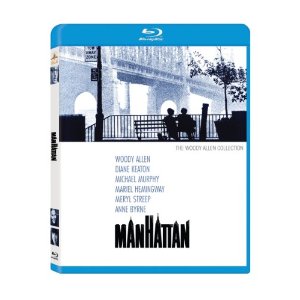 “Manhattan” is the product of Allen’s “mature” 1970s phase, the phase that also produced “Annie Hall” and “Interiors,” and it’s a wonderful film. It’s not the plot that makes it singular — it’s typical upper-crust New York Allen, full of neurotic people in therapy cheating on one another and making mistake after mistake in their pursuit of what they think will make them happy. No, what makes “Manhattan” so effective is its style (compared to Annie Hall’s script). Filmed in black and white (because, as Allen’s character says in an opening voice over, New York is a city that has always and will always exist in black and white), the film is a love letter to NYC, and it suggests that the neuroses that fill its denizens are as much a part of the city’s character as its architecture, culture and diversity.

And in Manhattan there are great performances. Allen is at his most difficult – and in some ways his least likable. As Isaac, he’s trying to do the right thing, but is rarely selfless enough to follow through with it. Diane Keaton is great as Mary, the lynchpin between the two love triangles – vain, pretentious and yet you can see why Isaac falls for her.

The relationship drama is poignant and honest, but it’s only one thread of what is arguably Woody Allen’s richest, most detailed cinematic expirence. There’s also the simultaneously realistic and romanticized portrayal of 1970s New York, with its Equal Rights Amendment fundraising events and Central Park carriage rides, its dingy apartments and moonlit promenades. Manhattan captures the city as it was and as Allen wishes it could always be. Of course, it goes without saying that the film is exceptionally funny and eminently quotable.


With Manhattan the audio and video quality of the blu-ray are amazing. However, once again there are no special features. This is very disappointing.

are now available on blu-ray. Pick them up and enjoy!

Overall:      Annie Hall / Manhattan 4 neurotic Jews our of 5 (just because of the lack of special features)