You are here: Home / They Read / Book Reviews: A Dangerous Woman 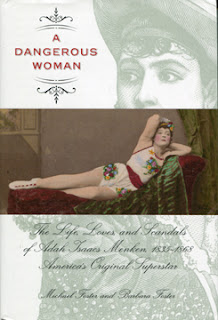 Authors: Michael and Barbara Foster
While the subject matter (the woman herself, Adah Menken) enticed and titillated, A Dangerous Woman crept continuously toward a swamp like ending.  The prose seemed stilted and tedious, and I had to blink a few times to finish the book.
Not to say that the woman that Michael Foster and Barbara Foster embrace was not interesting and entertaining.  However, Adah comes across the page as a dilettante in drama, drama and more drama, instead of the intelligent, well read, author and writer as well as the “naked lady” of the theatre that she became.  A woman of many contradictions, I admired the saga of Adah Isaacs Menken and only wish that it had not come across as a PhD dissertation.
That said, this is a book worth reading for the information it contains.  Scandalous, provocative, dangerously athletic, sultry – Adah Isaacs Menken kept the company of the literary greats of her time:  Walt Whitman, Charles Dickens, George Sand, Alexandre Dumas, Sarah Bernhardt, and Henry Wadsworth Longfellow who sat by her sickbed in Paris composing a beautiful love poem as Adah’s tuberculosis ate at her flesh.  Who was she?  How did she become the most prominent actress of her time?  How did she survive in the Victorian era as she shed all her inhibitions and created sensation after sensation both in the theatre and in her personal life?  I am not so sure that we found out in Michael Foster and Barbara Foster’s biography.
The facts, certainly, are laid out and laid out well.  Born in New Orleans to an Irish father and mulatto mother, little is known about Adah’s early childhood.  She was wild in Texas as a teenager, and then shows up as wild in adulthood.  Known for her beauty, her body stocking nakedness, and her audacity, Adah was dangerously injured many times in the parts that she played.  Best known as her part Mazeppa, she tied herself to a stallion in her performance.  Her only child, a boy, died as a baby.  Married five times, Adah also had many lovers.
Dead at 33 from her performance injuries and tuberculosis, Adah left a trail of famous friends behind.  She wrote a book of poems and while married to Alexander Menken, wrote for The Israelite.  A complex woman, perhaps the biography was made more difficult by the little information Adah left behind.  But behind the beautiful façade, I suspect that there were more personalities that we will never really know about.
Worth reading, but sluggish on the prose.
A Dangerous Woman: The Life, Loves, and Scandals of Adah Isaacs Menken, 1835-1868, America’s Original Superstar

can be purchased at your favorite bookstore.

Overall: 3Review by Broad “A” – Ava We received a copy of this title for our book review. All opinions are our own.