You are here: Home / They Watch / DVD Reviews: The Whistleblower 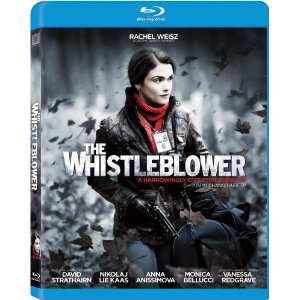 Gotta love movies about corporate corruption. There is a huge genre of films but they mainly focus on a dramatic court case. However, The Whistleblower does not. It’s become a rarity to find a political thriller that is intelligent, intense and intriguing. So when one like The Whistleblower comes along, I find no trouble in treasuring every moment of it.

Inspired by true events, Kathy is an American police officer who takes a job working as a peacekeeper in post-war Bosnia. Her expectations of helping to rebuild a devastated country are dashed when she uncovers a dangerous reality of sex trafficking, political corruption, cover-ups and intrigue amid a world of private contractors and multinational diplomatic doubletalk.

The story here is strong and every moment, especially in the final act, breathes with a wicked intensity that keeps you on your toes, but the real driving force of the film is Weisz. For some reason it seems like it’s pretty hard for films to present female characters who are strong and firm in their beliefs without turning them into unbearable stereotypes. This is not a contrived, or “generic” “CSI” story.

Frequently, the subject matter and scenes of girls undergoing sexual abuse and torture are stomach churning. The film can be relentless at times showing various punishments and cruelty. Human trafficking, especially if it involves a trusted world organization and its sleazy contractors, is an extremely important subject to cover and make films about; therefore, be ready to adjust uncomfortably in your seats as you watch downright disgusting and brutal activities perpetrated against teenage girls.

On the flip side some scenes go over the top. It kind of cheapens the whole thing.

The movie is dark and gritty but the definition is clean. The film just looks great no matter how dark and disturbing the images are. The lone bonus feature on the disc is Kathy Bolkovac: The Real Whistleblower, a short featurette that includes interviews with Bolkovac, Weisz, and the film’s writers and director.

This was the real deal. The Whistleblower is an amazingly engaging feature that while hard to watch is a must see. However, this is better rented rather than owned because I can guarantee that you will only want to see it once.

will be available for purchase beginning January 24, 2012.

Overall: 4 sex slaves out of 5