You are here: Home / They Watch / DVD Reviews: the Help 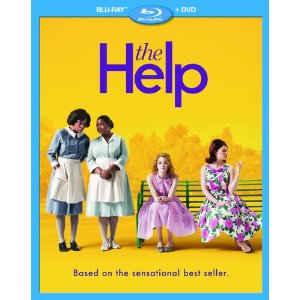 Jackson, Mississippi, 1963. When Junior League member Skeeter Phelan returns home from college to pursue her career as a writer and take care of her ailing mother, she discovers that her beloved Black maid Constantine, who raised her, is missing from her home. She questions everyone, but no one, including her mother, will reveal anything about Constantine’s leaving.

As Skeeter returns to her spoiled entourage of privileged twenty something Southern friends, she finds herself appalled at their callousness and prejudice against their Black help, and their neglect of their own children and husbands. She makes a decision. She listens as her best friend Hilly presents a codicil at the Junior League meeting to have separate bathrooms installed in all white homes for The Help to keep “their germs” from infecting their children. Skeeter refuses to write the proposal which passes in the Newsletter (she is the editor). And so begins The Help.
Skeeter calls a New York editor with plans for a book detailing the lives of the Black maids in Jackson from THEIR point of view. She approaches Minny, Hilly’s maid, and asks for her help in telling her story. And she asks Minny to gather the other maids, including Minny’s best friend Aibileen, to gather in secret and talk to her about the secret project.
As Skeeter depicts the lives of Aibileen and Minny, Skeeter’s editor in New York gives her the heads up for the book.
Dramatically written and filmed as a user friendly novel and movie with altruistic Skeeter at the helm, The Help demands some questions. Definitely presented as a white girl hero defending the poor Black maids of Jackson MS in an angry civil rights environment, I for one question Skeeter’s ambition. For Skeeter knows she is creating an event that might kill the women she claims she is protecting, and she is not innocent of using them as a vehicle to her unrivaled ambition of being a writer. And she knows the laws of Mississippi, and that she and the Black women are breaking the law. Just a thought.
However, I still LOVED the movie. The acting in all cases is beyond superb, and the portrayal is not one sided. Many of the white women in town feel the same way as Skeeter, and many of the Black maids love their white families. Funny as well as evocative, I didn’t care what Skeeter’s real ambitions were. It didn’t matter. I laughed, I cried, and I loved that the character of Hilly Holbrook was taken down! Thought provoking, and a good look at racism in the South in small town Jackson in 1963. A “To Kill a Mockingbird” tale that reveals the pain and devastation that inhumanity lends to any town and any race.

« DVD Reviews: The Art of Getting By
Holiday Gift Reviews: Poo-Pouri »