You are here: Home / They Watch / DVD Reviews: The Art of Getting By 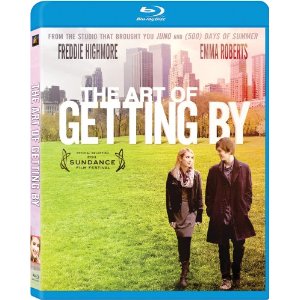 Art of Getting By [Blu-ray]

I love coming of age stories about high school. Rebel Without a Cause, Breakfast Club and more recently The Wackness are all kind of the same movie. That is what I like about them; all “teen films” are the same. “The Art of Getting By” isn’t anything great, yet it’s story brings back memories of the times when most remember that being their high school days just like the rest. When we struggled for social acceptance, worried about making good grades and getting into college, and “true love.”

Believing the quote that you are born alone, die alone and everything else is an illusion, George doesn’t see the point of life, school, or homework. Then he meets Sally and he now has a reason to go to school and make friends, even if he’s not ready to admit to himself or to her that he likes her. The school’s principal and art teacher introduce him to an alumni, and successful artist, Dustin, who can help guide George along life’s path, but other distractions start surfacing, and George might not even be able to graduate from high school.

Honestly there is nothing new in “The Art of Getting By” and because of that the move kind of sucks. Is it about getting the girl, finding your path in life, or just graduating high school? Of course it’s about all of that, but at times it seemed to be about none of that. Its aimlessness in telling me what the point of it all was, seemed a little juvenile. It’s a teen coming-of-age film, probably meant for the twenty-something crowd, but missing any greater meaning to fulfill its audience. The ending felt cheap, very cheap. I felt like the characters learned nothing but to do what they were told by older and other characters. This film lacked what all of my pervious and excellent teen film’s had, edge. Excuse my language but this film had absolutely no balls.

This film looked like New York and about half way through the movie I began hoping this would turn into a New York story but as the third act rolled around I was hoping for the cloverfield monster to eat these Upper East Side assholes. The acting was not half bad either. I think Emma Roberts could become a good actress one day, I really liked her in Scream 4 and in this she does good with what she has although she has played this roll before. Highmore is good no great I wonder how he will mature as an actor.

On the up side there weren’t too many special features and the cinematography was great. Unfortunately the special features were all very similar including the same interviews and such all of which are underdeveloped. I’m sorry but I could not sit through this movie again for the commentary.

Overall if your 16 and have a hot date this may be the movie for you, classic make out fodder because no one could be that interested in this film. For everyone else this feels like a Hollywood film that is parading around as a Sundance Indy. A wolf in sheep’s clothing.

Art of Getting By [Blu-ray]

can be purchased at Amazon.com and other retailers.