You are here: Home / They Watch / DVD Reviews: Heavenly Creatures 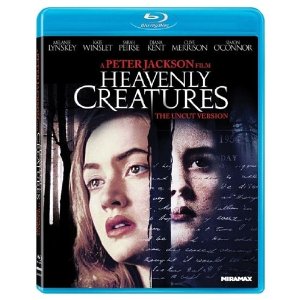 I really got into film towards the end of high school.  One of the first directors I attached to was Peter Jackson (he was currently making the Lord of the Rings films).  After a late night cable viewing of Dead Alive I went to the video store and marathoned his films.    I was about 18 and I really remember being creped out by Heavenly Creatures.  It had a great slow burn to it. Heavenly Creatures, while it’s not perfect, it is often perfectly filmed, framed and tonally much more assured than any of Jackson’s prior pieces.
The synopsis goes like this.   Pauline Parker and Juliet Hulme met in school during the 1950s. Instant best friends, they proceeded to spend every minute possible together, often writing about a fantasyland of their own invention. More and more estranged from their respective families, the two girls realize that they are extremely different from most other people, and agree to take any steps necessary to ensure that they are not separated. The two families are increasingly concerned about the girls’ friendship in a strictly moralistic era.
I was wicked excited for this watch; as I had not seen this film in years!  Unfortunately, when I originally saw it I was stoned (sorry mom) because this viewing really did not hold up for me. It’s a clunky film, forcing sensational issues on us, and rather too many of them, really, because it feels as though button-pushing is the goal.  As much as some scenes are really gripping and commanding, the whole movie, taken scene after scene, is sloppy and indulgent. It might push you out of the movie, the way it did me, so that you feel outside the experience looking in. Maybe even a bit impatiently.
There are redeeming qualities to this film.  The acting is superb – Kate Winslet and Melanie Lynskey is absolutely amazing here.  The camera work at times is brilliant other times it is not.  The digital transfer is very sharp and well defined.
* Unfortunately, there is only one special feature, a trailer.
Overall, this is Peter Jackson’s most mature film to date and his second best (I have a soft spot for The Frightners).  The performances make this film a must see but the story and pacing will drag you down. I recommend watching in two parts.
Heavenly Creatures

is available on Amazon.com and other retailers.