You are here: Home / Fun / DVD Reviews: City of God 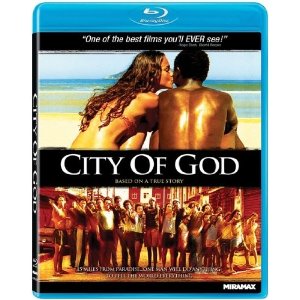 I remember seeing this film opening day in Providence at the Avon cinema.  It was my freshman or sophomore year of college on a brutally cold Friday night.  I had no date I was smoking cigarettes in front of Antonio’s Pizza.  I was completely unaware of what I was about to watch.  I ran into some friends that asked if I wanted to go to the bar but I declined (I think due to low cash flow).  After buying my ticked they gave me a two-dollar bill back, which was awesome.  Without popcorn in hand or a drink I sat in what may have been the most uncomfortable seat in the house…and enjoyed ever second of it.
Synopsis time!
Brazil, 1960’s, City of God. The Tender Trio robs motels and gas trucks. Younger kids watch and learn well…too well. 1970’s: Li’l Zé has prospered very well and owns the city. He causes violence and fear as he wipes out rival gangs without mercy. His best friend Bené is the only one to keep him on the good side of sanity. Rocket has watched these two gain power for years, and he wants no part of it. Yet he keeps getting swept up in the madness. All he wants to do is take pictures. 1980’s: Things are out of control between the last two remaining gangs…will it ever end? Welcome to the City of God.
City of God is much more than a directorial assault on the senses. As Raul Walsh said if you don’t have a story you have nothing, and many flashy Hollywood films have fallen short in using ‘ultra-modern’ direction to disguise the fact that no substantial story exists underneath. City of God is most brilliant in that it combines directorial and editorial brilliance with a story that is almost second to none in recent times. Only the true greats manage to cater to these two needs of cinema, and this is one that does. The direction is amazing, but not to disguise the story flaws, and the story is brilliant, but does not overwhelm directorial originality. But simply, City of God is a perfect film for avid fans of cinematography, and those just in search of two hours of a bloody good story.
The blu-ray transfer does not let us down.  This film looks great.  I had to pick my jaw off the floor a few times.  The colors of wash on scene are great and preserved well on this transfer.
Unfortunately, the only supplemental feature here is a documentary about the current situation in Rio de Janeiro that was included with the DVD release.
After watching the film that night at the Avon I hid in the bathroom and caught the midnight show.  It was that powerful to me, I must have seen the film a half a dozen times until it was no longer playing.  This is one of my all time favorite films.  Highly Recommended.

is available just in time for gift giving.