You are here: Home / They Read / Book Reviews & Giveaways: The Whisperer 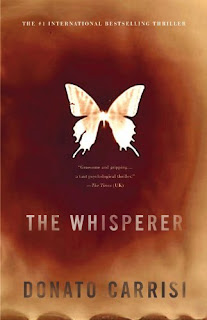 When you stumble upon a great crime novel, it’s only fair to share! I didn’t stumble upon Carrisi, however, it’s from Mulholland, which means singularly good, OOAK, and sensational – always. I have yet to read anything but great from their lineup of upcoming novels, and The Whisperer, by Donato Carrisi ups the ante – even for Mulholland!

A taut tightrope of psychological momentum infuses The Whisperer‘s characters – complex, multi layered, and outrageously creative, we see no stumbling in the acrobatics of this novel. Pair evocative characters with a plot that is a high-wire act of its own, and you come up with a novel that’s a winning act.

Criminologist Goran Gavila partners with police officer Mila Vasquez in an exquisite polarity that mirrors a quintessential crime plot! You will not unravel the ending in this novel before its’ end, it is simply impossible.

Gavila and Vasquez have been called in as “consultants” when six graves are discovered by children walking their dog. The graves contain the severed left arm – one in each grave – of six little girls, five of the six girls have been reported missing in the last two months, alerting police to a serial killer on the loose.

Criminologist Gavila is known for his brilliant methodical, and always successful profiling and capture of serial killers. Mila Vasquez is a loner, a police officer who only investigates missing children, and she’s damn good at it. She cannot tolerate people because she lacks compassion and empathy, as she is well aware. When they join the police investigative team as adjunct consultants, Goran commands respect – he leads the investigation. Vasquez quietly makes subtle and impressive connections, and the two find themselves drawn to each other. As they ponder the clues, and when three of the girls’ bodies turn up in sensationally bizarre ways, they realize two things. ONE, the killer is speaking to them, but not to draw attention to himself, an anomaly in a serial killer, and TWO – most important – the unknown sixth child is still alive, and no parents have come forward. They also realize that their killer constantly intuits their every next move.

Strangely, in another part of the country, a prisoner is watched by the Warden because of his telling behavior. The prisoner leaves no DNA in his cell, he obsessively decontaminates his cell of his own hair, skin – any trace of human “debris” that could reveal who he is. He speaks to no one, refuses to give his name. The Warden soon realizes that the man is protecting his anonymity, and the Warden contacts Gavila with his concern that the man could be a serial killer. AND – the prisoner will be released in two months.

While Gavila and Vasquez search the clues, and construct a profile of their killer, they each carry their own terrifying and abominable secrets into the search….and it almost kills them both, from the inside out.

Exquisitely fine tuned, the plot and characters mirror each other as good and evil reveal themselves not only in the killer, but in the psychological drama. Carrisi’s detail in criminology places tension on the wire as his characters lose their poles – and their balance.

Transcending genre, Carrisi’s The Whisperer sands with writers like Daniel Woodrell, resonates Falkner at his psychological best, and makes Alfred Hitchcock look like a lion tamer – retired. Succulent writing, a plot that proves unbeatable, and with unforgettable characters, The Whisperer is that one true thing in a great novel. Don’t miss this one. Truly unforgettable.

is available for pre-order on Amazon.com and will be available in book stores beginning January 5, 2012.