You are here: Home / Fun / DVD Reviews: West Side Story 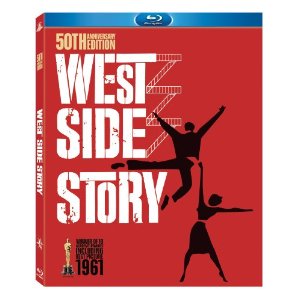 Martha Graham, Baryshnikov, Jerome Robbins – these were my heroes. My degree is in dance. I spent my youth on stages in rehearsal halls, etc. I auditioned, practiced, took class, and then did it again (and again, and again). West Side Story was and still IS my “heart” movie. With Jerome Robbins’ choreographic styling, the flow between story, music and dance is perfection. Add in Stephen Sondheim and Leonard Bernstein and you’ve got a classic that holds it’s place as MY all time favorite musical as much today as when I first saw it in 1961.

With two rival gangs vying for the same territory, this street version of Romeo and Juliette tells the classic tale of a love that transcends class and color. The Jets led by Riff vs. The Sharks lead by Bernardo are at constant war. When a meeting at the dance brings Bernardo’s sister Mari face to face with Riff’s best friend Tony it is love at first site. While the two lovers plan a secret meeting the Sharks and Jets meet to rumble. Tragedy strikes when fists become weapons. In a heartbreaking conclusion….well, you read Romeo & Juliette, so you know.

The film was cleaned up beautifully in the blu-ray edition and looks more like a stage play (with vivid colors) than it did originally. The  music holds up, the dancing holds up and the story is timeless.

is available in stores nationwide.