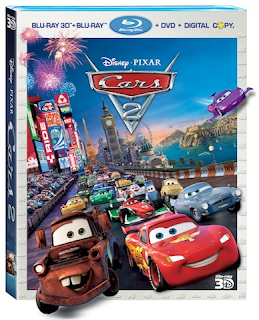 Was this bound to happen?  Nothing could have topped Toy Story 3.  Does Pixar’s first feature after Toy Story 3 have to be so bad?  Unfortunately yes.  Pixar could not have made modern animated classics for almost 20 years just to produce this film.  This has to be someone’s fault.  OK maybe I’m being too harsh.  It was not that bad, but with Pixar the viewer expects a lot.  It’s amusing, it’s comic, it’s ostentatious, it’s filled with fast, spy mischiefs, but it’s also flat, and one-dimensional.  I also hate Larry the Cable Guy, whose voice is the primary speaking character in this feature.

Star racecar Lightning McQueen and his pal Mater head overseas to compete in the World Grand Prix race. But the road to the championship becomes rocky as Mater gets caught up in an intriguing adventure of his own: international espionage.  Usually I have more synopses but there was not that much to write.  That simple of a story was completely over plotted in the film.  I don’t know why the cars from the first film were there.  This film would have flourished as an exceptional Bond parody without any mention of the first feature. Michael Caine was channeling his inner Bond here and that was excellent, I would have happily sat through an hour and a half of that.
Don’t get me wrong; parts of this film are a blast.  Everything that did not involve characters from the original was excellent.  Am I being too harsh? Probably.  I am the first to state that I expect a lot from Pixar.  These expectations made it very hard to just site back and enjoy.
Visually, this film does not disappoint at all.  It’s bright and colorful.  I am going to use this film to show guests the wonders of Blu-ray.  Everything in this film is so incredibly detailed and it shows on the Blu-ray, its beautiful.

However this edition of the film has very few special features.

Over all this film was Pixar’s weakest.  Do not expect to love this like you love Toy Story or Up, however there is still action and fun to be had with this movie.  Cars 2’s fun is more appealing to children than adults.

is now on the DVD/blu-ray shelf at your favorite retailers.


We received product for our review. All opinions are our own.
« CD Reviews: Big Bully
Holiday Gifts: L’Equip Blender »