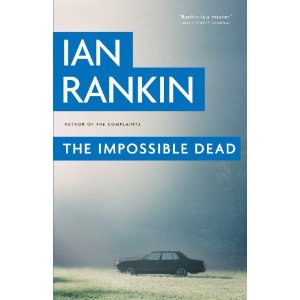 Scottish crime writer Ian Rankin is one of the best – you can take it to the bank. And he does, in his new Complaints and Conduct novel, The Impossible Dead.

Inspector Malcom Fox, from the Complaints office in Edinburgh, and his two colleagues, Sergeant Tony Kaye and Constable Joe Naysmith, are called into Kirkcaldy, Scotland branch to interview three policemen: DI Scholes, DS Haldane, and DS Michaelson on an internal police matter. Scholes, Haldane, and Michaelson are close friends to their fellow inspector, Paul Carter. Inspector Paul Carter has been found guilty of arresting women and offering to let them go for sexual favors. Drugs are involved. While Paul Carter awaits sentencing, Fox, Kaye and Naysmith, the Internal Affairs officers, are here to ssee if Carter’s three colleagues have covered up for him – “in the line of duty.”

Rankin’s consummate ability to bring each of his characters into a round moon halo of auspiciousness is part of his charm. His characters rise to life in sharp dialogue, succinct prose, and an ability to find their readers and jump start their interest from the get go. Malcolm Fox’s complexity and vulnerability bring us one of Scotland’s best Inspectors.

As Fox, Kaye and Naysmith arrive in Kirkcaldy, they are stonewalled by Kirkcaldy’s entire detective force. The three men they have come to interview are “out and about,” on duty or out sick The Kirkcady force, like all cops, hate the Complaints, the inside cops who report on the misconduct of other cops within the ranks. As Fox spins his wheels, he decides to begin with the person who outed Paul Carter. That person is Alan Carter, Paul’s own uncle, now retired from the force. Inspector Malcolm Fox goes to interview Alan Carter at his home, Gallowhill Cottage. Alan Carter lives alone, with his ancient border collie, Jimmy Nicholl. Alan Carter, retired, now runs his own security company, with a current high profile client. Alan tells Malcolm that one night his nephew, Paul, came over after a drinking spree, and Paul revealed to his uncle the details of his first victim, Teresa Collins. Alan Carter called Superintendent Henderson, the retired head of the Kirkaldy force. Two other women cam forward and Paul Carter was found guilty. Then Alan Carter dropped the bomb – April, 1985. Fox left, and the next day, alan Carter is found dead in his cottage. The scene is set up as a suicide, but Carter has been murdered.

Malcolm and his team start checking up on an old case in April 1985 – and then Malcolm finds out the last calls coming in to Alan Carter just before he died was from Paul Carter, his nephew. The April 1985 connection was a case that Alan had been investigating the murder of Francis Vernal, reported by the police as a suicide. And a lot of money went missing from Verhal’s car, where it was hidden. The same type of weapon was used to kill both Alan Carter and Francis Vernal, a gun that shouldn’t exist. Both men were framed as suicides.

As Fox and his crew investigate, the signs of a huge political cover-up begins to surface. More and more people show up dead, and the signs lead up to the highest ups in the Justice Department, a married couples, long ago political protestors. In and out of his case, Fox tries to deal with his sister and his father, whose health is rapidly failing.

Typical Rankin, the plot runs aground only to kick-start into high gear as Fox and his men solve the mysteries and reveal the truth. Fabulous writing, detail perfect plot – we have another superb Malcolm Fox novel on our hands.

will be available for purchase beginning November 21, 2011.