You are here: Home / They Watch / DVD Reviews: Water for Elephants 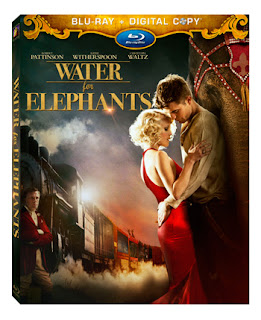 I entered this film with such odd expectations.  I thought it was going to suck because well it looked like it would suck.  I think that the director is a complete hack, his past two features were so bad I neared self induced coma during both (Constantine and I AM Legend). –   Now I’m not so sure.  I don’t like Pattenson’s work either, although he seems perfect for the upcoming Cosmopolis one of my favorite novels.  Reese Witherspoon’s good, but I can’t remember the last time I saw her in anything.  Christoph Waltz is brilliant even in the Green Hornet.  So what did I think about this one?

After his parents’ death, Jacob Jankoski is left penniless and homeless. Events lead him to joining the circus as their vet, working under their unstable boss August whose violent tendencies give everyone reason to be cautious around him, including his beautiful and quiet wife Marlena, whom August is very possessive of and who Jacob finds himself soon falling in love with.
Its all quite cliché and cute.  There was a real movie here if the viewer looked hard enough.  Parts of this were compelling and beautiful.  This film should have been a love story between Jacob and the elephant.  The film did not need all the background complexities.  Some gay erotic tension between Pattenson and Waltz would have been fine (the film had enough of it).  With this film I realized I cant tell the difference between Pattenson’s sexy face and stupid face. 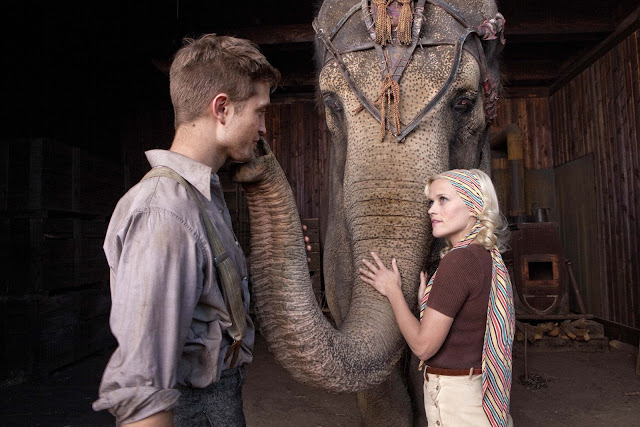 The design of the film was great.  The acting from everyone but Pattenson and Witherspoon was brilliant, the mentioned two were just good.  Waltz can act circles around anyone, he makes evil look so normal, and he is really chilling.  Although I could not hate him, his character had so much depth.  All of the carnies are compelling and very believable.

This film may have changed my mind about Frances Lawrence.  It looks great.  The camera work was not all that impressive but he never pushed himself too far.  The set design was great.  The train set up was fantastic and wonderful and so elaborate.  The overall look of the movie was very good.
Overall I did not care for the main storyline but there was enough substance around it to keep me entertained.  Christoph Waltz continues to amaze me. The work with Pattenson and the elephant was wonderful and perfect and I wish that I saw more time with this relationship.

is available at DVD retailers everywhere.

Overall:  3 toothless tigers out of 5