You are here: Home / They Read / Book Reviews: Think 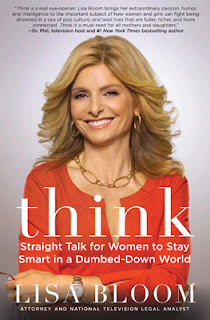 THINK – Straight Talk for Women to Stay Smart in a Dumbed-Down World
Author: Lisa Bloom
I want to personally thank FSB media for sending me this book to review.  THINK is probably the most important book to hit my review desk at The Review Broads in the two years I have been reviewing books.
Sinking her teeth into the horrible reality of today’s media that gnashes its bones on celebrity trivia and vanity stories, Bloom demands that as women we stand up and take note.  Celebrity based news creates the entirety of our media lives as women today.  Instead of involving ourselves with the crucial devastation that climate change creates to our lives as humans, the destruction of our environment, worldwide genocide, the sex trade of children – we agonize over Botox and Restalyn, cosmetics, LOOKS.
I suggest that so far this might be a boring review for my readers, as we have all been in La La Land so long.  So let’s make it personal.
I had not bought or worn ANY makeup for years.  I scoffed at the ridiculous cost and the idea that I had to look – BETTER.  Then I started blogging, and for the first time in ten years, dating.  I am an intelligent, brainy type, somewhat attractive, and have always put my brains first before anything else.
Suddenly, I am spending $60 on a bottle of foundation, $100 per month on haircut and color, $100 on blush, lipstick, having my face “done” at Nordstrom’s.  I spent $5,000 of money I certainly DO NOT have in clothes the last eight months, mostly on credit cards I cannot afford to pay.  I buy 7 for All Mankind jeans, True Religion jeans, and lost 30 pounds to look SLEEK in them.  I started paying $200 a month on bioidentical hormones, to look firm and feel sexy.  I have probably bought every single item of clothing in the Sundance Catalog for the last year.  Yesterday, I borrowed an expensive digital camera and took pictures of many of my “new” (and unworn) jewelry items to put on eBay.  For I had lost my mind – literally.  Suddenly, I was twelve again, shy and scared, begging for Weejuns and Villager sweater sets to be “cool” – and I AM 62 YEARS OLD!  What happened????
According to Lisa Bloom (God Bless Her!) several things happened.  I can add a few more.  Instead of seeing critical news issues in our newspapers, TV, and internet, we are inundated with celebrity trivia.  Examples Bloom has cited are Angelina Jolie and Jimmy Carter.  In order to sell newspapers, TV programs, and to seek the American female audience’s interests, news executives have to give women what they want.  Gossip, sex tips, plastic surgery stats of the stars, and celebrity news.  When was the last time you reached for Newsweek or National Geographic while waiting in line at the grocery store?  No, instead we pick up the National Enquirer – Liz is dead.  Jen anguishes over Brad.  Catherine Zeta Jones has cancer.  Ten years ago, I would have been horrified to even LOOK at the National Enquirer.  What HAPPENED TO ME?  Instead of Jolie’s humanitarian efforts, the huge difference she has made to children in third world countries, we worry about her baby bump.  Is she or isn’t she?  Clairol didn’t help with that line!  Jimmy Carter has spent the last 20 years practically erasing a horrible worm that acidifies flesh to pop out of its victim’s eyes, faces, and limbs – the guinea worm – in third world countries.  Why was this NEWS to me????  Why as women have we told the press we DON’T CARE??
Look, I am as guilty as the rest.  I tune out because the real news is so drastic, so scary, and so sad, so draining.  What can I do, when I can’t even get my budget together?  NOT!  Instead of buying a new Clinique lipstick I could send $20 and educate a child for a year!  I graduated first in my class in college.  And I am ashamed of my intellectual superficiality.
With wisdom and information, Bloom has given me serious insight into real websites, books and international news criteria to inform myself.  Americans are 41st on the list for education internationally.  Chinese and Asian children are near the first.  Education has been slashed from our budgets.  Our seniors CAN’T READ.
Beautifully written, cutting to the chase, Bloom documents solidly and forcefully.  What has happened to women today that they are invisible after the woman’s movement shoved us toward equality?  What has happened to me?  When did I decide I wasn’t important enough to make a difference?  When did I slide into apathy?
If you read ONE book this year, just ONE, read this one.  Please.

Think: Straight Talk for Women to Stay Smart in a Dumbed-Down World

is available for purchase at bookstores everywhere.

Ratings are based on a 5-star scale
5 in credibility
5 in importance
5 in reporting
5 in Let’s Get Over Ourselves!